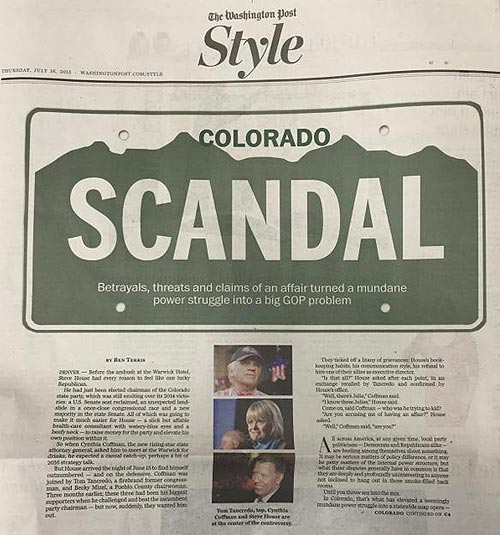 “You can’t stop it, you can only hope to contain it.”
– Unknown origin

If you close your eyes and squeeze them tightly…if you hold your breath and hum loudly to yourself…for a few moments, then, you can make the Coffmangate Scandal go away.

But just for a moment.

In today’s Washington Post, the Coffmangate Scandal gets the full front-page, feature-length treatment, with 2,400 words from reporter Ben Terris detailing a story that just gets worse by the week for Colorado Republicans:

If House — who swiftly denied the affair allegations — has been bruised, so too has Coffman. The wife of Rep. Mike Coffman (R-Colo.), she had been widely viewed as a likely contender for governor in 2018. Now commentators across Colorado are wondering aloud if the state attorney general committed blackmail.

“The allegations that have been levied against me, and I am the top law enforcement officer in the state, are criminal in nature,” Coffman said in an interview with Denver’s CBS affiliate. She fiercely denied wrongdoing and flat-out accused House of lying about the threats. (House declined to be interviewed for this story. Coffman and her staff members did not respond to multiple calls and e-mails.)

This was not how Republicans wanted to start the election cycle.

There is not a lot of new information in the Washington Post story, which is written as a blow-by-blow recount of everything that has happened with the scandal up until now, but it is still a must-read for politicos from Washington D.C. to Colorado. It also exposes a much larger audience to the scandal that is engulfing the careers of Attorney General Cynthia Coffman and her husband, Rep. Mike Coffman (R-Aurora), making it damn near impossible for Coffman supporters to downplay the story’s significance.

[Click here for more background on the Coffmangate Scandal.]