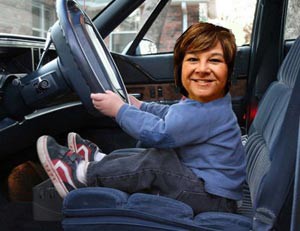 When Republican Libby Szabo announced in January that she would resign from the State House in order to fill a vacancy on the Jefferson County Board of Commissioners, she was roundly criticized; the editorial board of the Denver Post said Szabo was “thumbing her nose at voters” by resigning her seat just two months after winning re-election to a third term in the House.

If Szabo’s job-hopping was “thumbing her nose” at voters, then she has since moved along to the middle finger. Szabo is now driving around in a brand-new, $40,000 car that was purchased specifically for her transportation needs as a county commissioner. Jefferson County Commissioners are technically allowed to request the use of a county-owned vehicle, but the other two Commissioners (Don Rosier and Casey Tighe) choose to drive their own personal cars rather than accept the kind of ridiculous perk that used to be common in scandal-ridden Jefferson County (former County Treasurer Mark Paschall, who was indicted over corruption allegations, once demanded that the county buy him a Cadillac Escalade).

It may be an oxymoron to call any Ford Taurus “top-of-the-line,” but county officials nevertheless sprung for the most expensive model because of an odd request from Szabo: She needed a car with “special pedals” because she is too short to drive a regular model.

No, seriously. We couldn’t possibly invent a story this absurd. 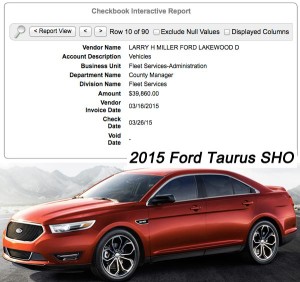 Szabo is indeed a fairly short individual, but for years she drove her own vehicle back and forth from Arvada to the State Capitol in Denver. Maybe Szabo’s personal vehicle needed replacing, but you’d think she could find enough money in her $86,000 salary to buy her own car. Szabo no doubt understands the poor optics behind this request, because Jeffco purchased the Szabo-mobile two weeks before the County Commissioners voted to approve the expenditure (the invoice from Larry H. Miller Ford Lakewood is dated March 16; the expenditure was not formally approved by the Commissioners until March 26).

If you’re still inclined to shrug this off, we’ll leave you with the opening lines of this Denver Post story from reporter Joe Vaccarelli, which was first published just a few days before the county purchased Szabo’s new vehicle.

Whether wanting to get a message across to her four kids, coaching youth soccer for 10 years or working across the aisle on a bill in the state legislature, she feels that actions speak louder than words.

“I think the best way to instill something in your children is to actually do it and let them see you do it,” Szabo said.