“Finally, Republican leaders recognized what has been clear for weeks: whatever their disagreements with President Obama and his actions to address our broken immigration system, Congress must provide the necessary resources to protect our homeland from attacks and be prepared to respond to natural disasters. While we should have taken this action weeks ago, I am pleased to see this get done at last.” 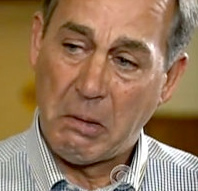 This picture of House Speaker John Boehner is a good summation of his last couple of weeks in Congress.

As CNN reports, the House of Representatives finally voted to approve a "clean" funding bill for the Department of Homeland Security (DHS), but all is not well in the GOP caucus:

The House cleared legislation Tuesday that will keep the agency operating through the end of September after a standoff last week threatened to shutter the agency and furlough thousands of workers. The 257-167 vote sends the bill to President Barack Obama for his signature.

Republican House Speaker John Boehner, who rarely casts votes, backed the bill, along with his top lieutenants. A majority of House Republicans opposed the bill. Just 75 GOP lawmakers joined with 182 Democrats to push it across the finish line. [Pols emphasis]

The legislation does nothing to rein in Obama's immigration executive orders — a top priority of conservatives. That issue was a sticking point for weeks as Republicans tried to tie DHS funding to the repeal of the orders but the party couldn't overcome Democratic filibusters in the Senate…

…Boehner told his members Tuesday morning that he had run out of options and the Senate couldn't pass a bill with immigration language attached.

It's nice to see the House doing its job and actually, you know, governing, though the political damage has been considerable on the GOP side. After weeks of arguing, House Speaker John Boehner seems to have all but given up on trying to work with his fractured caucus, which didn't help him anyway; despite holding the largest majority in Congress since the New Freakin' Deal, Republicans couldn't even fund a critical department without the support of Democrats. Colorado's Congressional delegation reflected this divide, with Rep. Mike Coffman (R-Aurora) the only Republican to vote YES, along with Democratic Reps. Diana DeGette, Ed Perlmutter, and Jared Polis.

How bad have things gotten for House Republicans? Bad enough that the American Action Network, a political group aligned with House leadership, spent $400,000 this week on TV and radio ads targeted at Republican dissenters. As Politico reported yesterday: 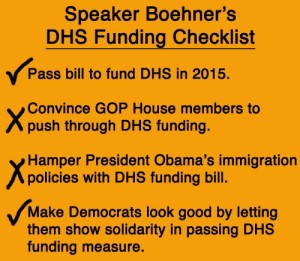 So, that worked out well.

The nonprofit American Action Network is airing an ad in three states — Kansas, Oklahoma and Ohio — urging Reps. Tim Huelskamp (R-Kan.), Jim Bridenstine (R-Okla.) and Jim Jordan (R-Ohio) to back funding for the anti-terrorism agency. The 30-second spot will run at least 50 times in each district — on broadcast, in prime slots — Tuesday and Wednesday as the House is expected to take up a DHS funding bill.

The group says the ad campaign, which also includes radio ads on nationally syndicated shows and digital ads in dozens of other districts represented by House conservatives, is the opening salvo of a larger effort to help Republican leaders pass center-right legislation. American Action Network says it will spend millions of dollars to contact voters in the coming months. The move appears designed to give Boehner cover to end the months-long impasse over homeland security funding.

The TV ad feature images of what appear to be terrorists and says that “some in Washington are willing to put our security at risk by jeopardizing critical security funding. That’s the wrong message to send to our enemies.” [Pols emphasis]

Jordan is the leader of the House Freedom Caucus, which led last week's effort to oppose Boehner's vote on DHS funding, and he voted NO today along with Reps. Huelskamp and Bridenstine. Republicans are spending hundreds of thousands of dollars going after fellow Republicans in their home districts just to try to get them to not shoot their own toes off. It's safe to say they aren't listening.

Republicans have been getting hammered for weeks by local and national media over an ideologic battle against President Obama's immigration policies…but they didn't do anything to stunt Obama's plans, either. Hell, Brian Shaw might be a better leader for House Republicans at this point.

It was obvious to anyone who could read that Republicans were not going to win this fight, but the degree to which they completely bungled this mess is stunning. This is an absolute disaster for Boehner and Congressional Republicans. It's difficult to see how things won't just get worse from here.