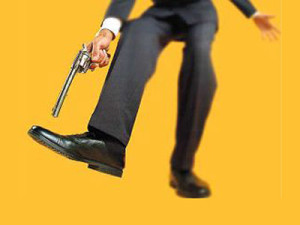 For God and country.

A slew of proposed bills from both the House and Senate target some of Colorado's hot-button issues, including one House bill that seeks to make performing abortions a felony…

…The abortion bill is an echo of past attempts to get personhood laws on the books in Colorado. The most recent attempt, a law that would have classified killing unborn child[ren] as murder, was rejected by voters in the November 2014 election.

A total of ten Colorado Republican legislators in the House and Senate have signed on as cosponsors of House Bill 14-1041. Democrats have assigned the bill to the House Judiciary Committee to die, avoiding the negative optics that sometimes come with sending a bill to the usual "kill committee" of State Affairs. It's not like the bill's fate is any less certain.

What this lost-cause piece of legislation will do, of course, is provide Democrats with exactly what they need to validate their contention that Republicans are the true "social issue warriors"–the label Republican Cory Gardner pinned successfully on Mark Udall as a foil to Udall's nonstop attacks on Gardner over abortion. The media and chattering class turned against "Mark Uterus," but when Gardner votes for a 20-week abortion ban in the Republican controlled U.S. Senate this year, what will they say then?

Because when local Republicans told voters last year that Colorado womens' "right to an abortion is not in jeopardy," they were flat-out lying. This latest abortion ban bill just continues a trend:

The risk inherent here is that voters, honest reporters, etc. will begin to understand that the "war on women" simply goes on hiatus at election time. This bizarre cycle of abortion being written off by the pundits as a nonissue in October, only to roar back to life the following January, can't go on forever.