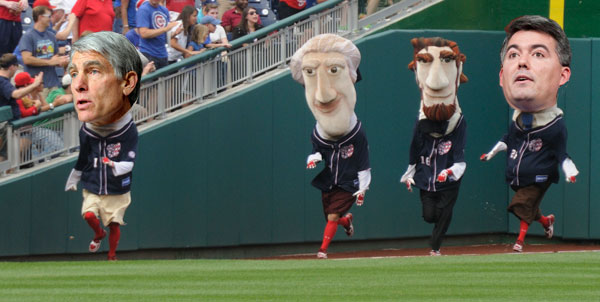 Sen. Mark Udall appears to be pulling away from Rep. Cory Gardner (as well as Lincoln and…Jefferson?)

Democrats are now (very slightly) favored to hold the Senate majority on Nov. 4, according to Election Lab, the Post's statistical model of the 2014 midterm elections.

Election Lab puts Democrats' chances of retaining their majority at 51 percent —  a huge change from even a few months ago when the model predicted that Republicans had a better than 80 percent chance of winning the six seats they need to take control. (Worth noting: When the model showed Republicans as overwhelming favorites, our model builders — led by George Washington University's John Sides — warned that the model could and would change as more actual polling — as opposed to historical projections — played a larger and larger role in the calculations. And, in Republicans' defense, no one I talked to ever thought they had an 80 percent chance of winning the majority.)

So, what exactly has changed to move the Election Lab projection? Three big things:

* Colorado: On August 27 — the last time I wrote a big piece on the model — Election Lab said Sen. Mark Udall (D) had a 64 percent chance of winning. Today he has a 94 percent chance…[Pols emphasis]

…Nate Silver's FiveThirtyEight model now has Republican chances of winning the Senate at 55 percent, down from 64 percent 12 days ago. "The two states with the largest shifts have been Colorado and North Carolina — in both cases, the movement has been in Democrats’ direction," writes Silver. "That accounts for most of the difference in the forecast."

The extent to which Sen. Mark Udall appears to be pulling away from Republican Rep. Cory Gardner is a bit surprising, though we've been saying for weeks that Udall has all the momentum in this race; last week we increased Udall's odds of winning to 65% in our latest election "model" (The Big Line) . This new prediction about the Colorado Senate race is also not an outlier compared to recent news reports; late last week national media outlets were noting that Udall's campaign was starting to pull away from Gardner. As we wrote back in August, Gardner's campaign has been throwing all sorts of different messages at the wall in hopes of getting something to stick — a lack of direction that usually indicates a campaign that is neither comfortable nor confident in its approach this late in the game.