Thanks, Obamacare: Rate of Uninsured in Colorado Plummets 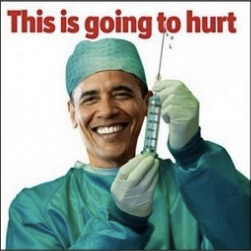 As it turns out, maybe not.

As the Denver Business Journal's Mark Harden reports, a major validation today for longsuffering supporters of the much-maligned Affordable Care Act, a.k.a. "Obamacare." After months of intense paid media by Republicans and allies to trash President Barack Obama's signature reform, mostly centered on the claim that "millions of Americans are losing their health insurance," the truth is dramatically against them:

Colorado ranks fifth among the states for the biggest reduction in the rate of residents lacking health coverage under the federal Affordable Care Act, according to a new survey from Gallup.

The Gallup-Healthways Well-Being Index report says 17 percent of Colorado's population lacked health insurance in 2013, and that percentage has now dropped to 11 percent, a 6 percentage point drop.

Gallup makes the point that the 10 states that saw the biggest drop in uninsured rates under the health-care law, known to many as Obamacare, were all states that — like Colorado — set up their own online marketplaces for health coverage for individuals and small businesses, and all 10 expanded Medicaid eligibility as the new law encouraged them to do.

Conversely, states that saw the smallest reductions in their uninsured rate were more likely to be those that either declined to set up their own health-coverage exchange or didn't expand Medicaid or both, Gallup's report indicates.

Here in Colorado, Republicans and allied message groups wailed on for months about the "335,000 Coloradans who lost their health insurance" as a result of Obamacare. But that's not the whole story: as we discussed at length, over 90% of those so-called "cancellation notices" in Colorado in fact contained instructions for renewing their existing plans. Thousands more were sent entirely in error. Republicans were determined to leave the impression with the voting public that these 335,000 Coloradans were left without health insurance. Fact-checkers repeatedly called out this claim as misleading, but to little avail–the budgets for the ad campaigns were massive, and no one could pressure broadcasters to take these false but highly profitable ads off the air.

Today's report that the rate of uninsured in Colorado has in fact dropped enormously, from 17% of the population to only 11%, totally disproves the "Obamacare policy cancellation" talking point. If the rate of uninsured Coloradans has plunged such a huge number, those 335,000 people did not in fact "lose their health insurance." The truth is, Obamacare has insured many more thousands of Coloradans than were covered before the law took effect.

And that means something Republicans do not want the public to realize before November: Obamacare is working.

The real question is, can Democrats get that message through to voters in time?