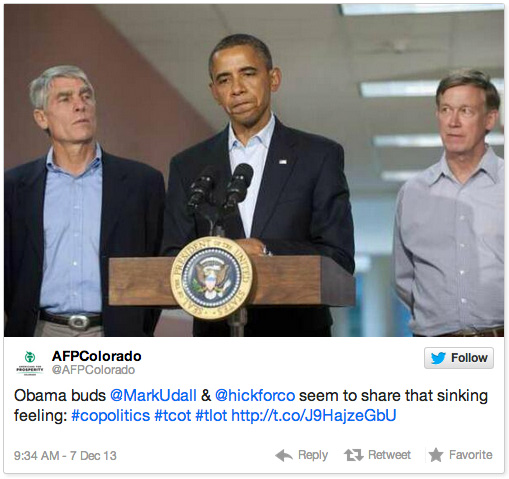 BuzzFeed follows up on yesterday's big story, the misuse by conservative group Americans for Prosperity of a photo taken in the aftermath of the Aurora theater shootings in 2012. As it turns out, yesterday wasn't their first offense:

Late last year, Americans For Prosperity posted a tweet attacking Colorado Sen. Mark Udall and Gov. John Hickenlooper for being “Obama buds.” The Koch-funded group used an image of the two Democrats standing with President Obama looking dismayed to make the point that the three men were sharing “a sinking feeling.”

The image AFP Colorado used was taken at a Colorado hospital in July 2012, where Obama and the two men were gathered to visit victims of the Aurora shooting.

Since we began writing this blog post about fifteen minutes ago, AFP Colorado has deleted all of their Tweets from this exchange in response to BuzzFeed's inquiry. The replies to them remain visible, and we screen-grabbed the originals before they went down. Obviously, AFP didn't show anything like the contrition shown yesterday after they were called out by media nationwide back in December.