Coffman To Minority Language Voters: “Pull Out a Dictionary” 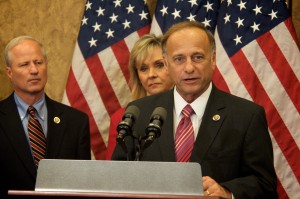 ​Rep. Mike Coffman has spent a great deal of time in recent months "reaching out" to the many ethnic groups in the new Sixth Congressional District, working hard to burnish his credentials with Asian and African immigrants in addition to his now-famous reversals on immigration policy–all directly intended to appease the large percentage of immigrant and ethnic minority voters in his district.

But as we've explored at length since Coffman began his transformation from Tom Tancredo's firebrand successor to embattled incumbent desperately trying to win over constituencies he routinely disparaged before redistricting, Coffman wasn't always such a nice guy to immigrants–especially where it concerns duties of citizenship like voting rights. Back in the summer of 2011, "Old Coffman" actually proposed the repeal of a section of the federal Voting Rights Act that requires bilingual ballots be distributed to qualifying minority language populations.

It's hard to imagine today's Mike Coffman seriously proposing to repeal part of the Voting Rights Act to make it harder for some of the very same immigrant communities he's courting today to vote, but in 2011, Coffman defended his "cost saving" proposal in surprisingly blunt terms. Here's a video clip from Spanish-language Univision News where Coffman explains his 2011 position–with translation below:

OLIVIA MENDOZA: To me, this is a big step backward.

DANIEL TUCCIO: Disagreement was to be expected by pro immigrant rights advocacy groups  who are angry over the Congressman's position.

MIKE COFFMAN: One thing they ought to do is pull out a dictionary when they are at home, because the ballots have been sent to them a long time in advance. [Pols emphasis] They can seek help from friends who speak English, look up words they do not know; sometimes you have to put a little more effort to assimilate into our culture.

MENDOZA: The foundation of this country is the participation of citizens of the United States in our democracy. When we begin to say that it costs us too much to have citizens engaged…what country are we going to become?

"What country are we going to become?" If "Old Coffman" had gotten his way, it seems we'd be a nation where immigrants who want to vote "pull out a dictionary!" Nobody's going to argue that immigrants should never bother to learn English, but English proficiency is not a requirement for citizens to vote in America. That's why we have a Voting Rights Act to help make sure it doesn't become a requirement, de facto or otherwise.

Bottom line: "New Coffman®" should be really upset at "Old Coffman" for this one.