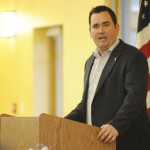 “Our accomplishments in the Treasurer’s office are not partisan or controversial but examples of common sense solutions for the taxpayers of Colorado,” Stapleton said in a statement…

Treasurer Walker Stapleton's first term in office as Treasurer is coming to a close, and it's proven to be a good deal for him–not least for his sweet arrangement that allows him to collect a six-digit income from his side investment business while drawing his taxpayer-funded salary. Treasurer Stapleton's investment strategy for the state has not been overly controversial to our knowledge, though we do hear complaints from time to time about the rate of return. But there was a time, back in 2010, when Stapleton was singing a very different tune–and while "Tea Party" furor raged, and Stapleton faced a Republican primary opponent, it was sometimes necessary for Stapleton to advocate for fiscal policies both "partisan" and "controversial."

For example, take this recorded debate between Stapleton and opponent J.J. Ament from June of 2010:

In this 2010 debate against Ament, Stapleton warned of a coming "hyperinflationary environment" due to various evil Obama tax-and-spend depredations, a very popular prediction on the right at the time, and recommends Glenn Beck-style that "using gold" as a "hedge against inflation" is "something we need to investigate."

At the time Stapleton said this, the price of gold was extremely high, and anti-government "Tea Party" paranoia sentiment was peaking. But as it turns out, we did not enter any "hyperinflationary environment" after 2010, and the price of gold today is hundreds less than its peak–or for that matter, the price it was during this debate in 2010. That should make any financially literate voter very happy that Stapleton didn't take his own advice.

Now folks, we're not naive, and we honestly doubt that Stapleton meant a word of this nonsense when he offered it in a primary whose terms were dictated by the radical right. This was a season, after all, when most every Republican candidate was compelled to repeat, for lack of a better term, goddamn crazy talk.

But really, somebody should be asked about this–Stapleton, Larry Mizel, somebody. Does every Republican who ran the "Tea Party" gauntlet in 2010 get a pass for the crazy things they were "forced" to endorse?

Let's get some "GOP establishment" types to say so then.