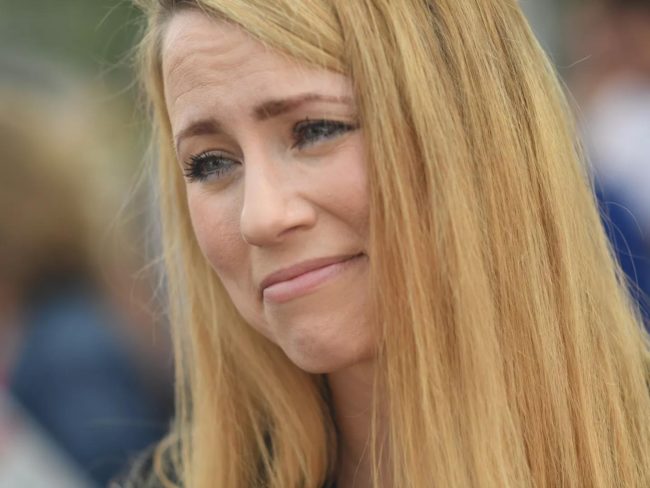 Back in early August as the state ramped up to mail out “Colorado Cashback” refund checks to Colorado taxpayers–refunds mandated by the 1992 so-called “Taxpayer’s Bill of Rights,” reformulated to give lower-income taxpayers a substantial increase at the expense of wealthier taxpayers — former militia leader and current Republican Party chair Kristi Burton Brown filed a campaign finance complaint against Gov. Jared Polis. Colorado Public Radio’s Bente Birkeland reported at that time:

Governor Jared Polis and the Colorado GOP are tangling over a letter taxpayers will receive with their TABOR refund checks in the coming weeks; Republicans accuse Polis of using the communication to boost his reelection chances.

The letter, which Polis described to CPR as informative, comes with the governor’s signature at the bottom. On Thursday, Kristi Burton Brown, the executive director of the Colorado Republican party, filed a campaign finance complaint alleging it amounts to electioneering at the taxpayers’ expense.

“This letter blatantly misleads voters by refusing to say the word ‘TABOR’ or ‘Taxpayer Bill of Rights.’ Instead, the Governor uses his own campaign language of ‘Colorado Cashback,’ a phrase he coined during his campaign for re-election,” states Burton Brown in the complaint.

The complaint against Gov. Polis was heavily covered by local news media, earning stories  in the Colorado Sun, Colorado Newsline, the Denver Post, the Colorado Springs Gazette’s political blog, and KDVR FOX-31 among other outlets. Of all of these outlets, only Ernest Luning and Marianne Goodland of the Gazette looked critically at the substance of the complaint, finding the obvious problem without much difficulty:

The GOP’s complaint, filed with the Colorado Secretary of State’s Office…charges Polis with instead referring to the checks as part of the Colorado CashBack, alleging the phrase was “coined during his campaign for re-election,” though the phrase appears to have been first used by legislators when they introduced the bill to authorize the accelerated refund program. [Pols emphasis] 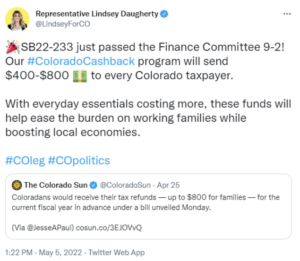 The complaint asserts without any justification that the term “Colorado Cashback” was created by Gov. Polis’ campaign, when that’s plainly not the case–lawmakers called the rejiggered TABOR refunds the “Colorado Cashback” plan when the legislation was debated last spring (Tweet right). This means the whole basis of Brown’s complaint is bogus–but that didn’t stop the local press from spending almost a week castigating Gov. Polis on the GOP’s behalf before any such determination could be made.

Well folks, today that determination was made by the Elections Division of the Colorado Secretary of State’s office–filing a motion to dismiss Brown’s complaint, finding “there is insufficient evidence to support a finding that Respondents violated Colorado campaign finance law.”

As it turns out, Brown never even tried to provide evidence to back up her contentions:

In support of her allegations, Complainant attached the July 7th letter and a portion of the fiscal note for SB 22-233 referencing the state expenditures related to the refund mechanism. Complainant did not explain why she believed the term “Colorado Cashback” was associated with Respondent Candidate’s campaign nor did she provide any evidence of the campaign using the term in the Complaint or in response to the Division’s request for information…

Complainant illustrated how Respondent Governor Polis did not embrace or use the term TABOR in association with SB 22-233 or the refund checks but presented no evidence that “Colorado Cashback” is campaign language, a campaign slogan, or a term that was coined by Respondent Candidate during his campaign, as alleged in the Complaint. [Pols emphasis]

The reason Brown couldn’t give the Elections Division any evidence that “Colorado Cashback” is a campaign slogan is that is clearly was not, having been used by lawmakers as far back as April to describe the one-time TABOR refund mechanism legislation Senate Bill 22-233. Republicans can seethe that Democrats neglected to mention the word “TABOR,” but there’s no law that says anyone ever had to. And as for the content of the letter to taxpayers accompanying the check?

[T]he plain language of the letter does not concern the nomination, retention, or election of any person to any public office, nor does it reference, let alone support or oppose, any state or local ballot measure. While Complainant alleges that letter supports the (re)election of Respondent Candidate to office, Complainant has failed to provide evidence that the letter is an electioneering communication not subject to the normal course and scope of business exemption. [Pols emphasis]

The flimsy factual basis of this complaint was apparent the day it was filed, and any competent campaign finance lawyer asked by any reporter inquiring would have told them this had zero chance of being upheld after a full review. That raises real questions about why the local press rushed to give this baseless complaint so much attention. For Republicans this is still on balance a misinformation victory handed to them by the media, since far fewer voters will hear that the story was debunked than saw the original reporting about the complaint.

All we can say is, hopefully the media’s attention continues even though Kristi Burton Brown doesn’t want it anymore. Every news outlet who reported about the original complaint now has an obligation to publicize its debunking just as vigorously.