Another Classy Moment With MTG And Lauren Boebert 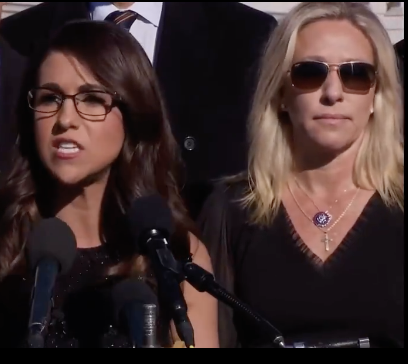 Rep. Marjorie Taylor Greene (R-Ga.) appeared to kick an unarmed demonstrator during a confrontation outside the Capitol on Thursday afternoon.

Videos posted to Twitter by Greene and the Gen Z activist group Voters of Tomorrow show Greene leaving a news conference while being questioned by activists about gun violence. As Greene approaches a crosswalk, she appears to kick one of the activists, who was walking in front of her.

Fascists like @RepMTG love to claim they’re doing things to “protect children” then turn around and literally kick them.
pic.twitter.com/QWUD8xKcf0

Pretty hard to defend what sure looks to us like MTG rushing ahead to position herself for an unprovoked old-fashioned schoolyard ankle kick, which in the adult world is known as misdemeanor battery, punishable under Washington, D.C. law by up to six months in the clink. As for Colorado’s own walking talking cornucopia of controversy Rep. Boebert? We haven’t seen the video yet, but what the Post describes could also be considered battery under D.C. law:

As the legislators left the event, Santiago Mayer, the 20-year-old founder of Voters of Tomorrow, approached Greene and Rep. Lauren Boebert (R-Colo.), another member of the caucus, asking to take a photo and claiming to be a “big fan,” a Washington Post reporter at the event observed.

But both members quickly recognized Mayer as an activist. Boebert pushed Mayor’s smartphone away and quickly exited. [Pols emphasis] Greene instead jousted with the group of activists — and accused Mayer of abusing children…

Again, battery assault is defined under the law as any unwanted intentional touching of a person, and that most certainly includes knocking away someone’s cell phone who happens to be legally recording a video of you. Boebert was wise to leave the scene instead of joining MTG in her smearing and ultimately physically attacking these activists, but the moment she put her hands on this kid’s cell phone the damage–that is, the crime–was arguably done.

The latest report this morning indicates that the activist kicked by MTG is pursuing legal action. We’ll be watching to see if an investigation ensues that could hold Boebert accountable for her behavior as well. In the meantime, much like Boebert’s longsuffering neighbors in Silt, the best we can recommend is to keep a safe distance–and if your values compel you to confront these very fine people in person, be aware of the personal safety risk.