Here’s the New “This is What Momentum Looks Like”

“Colorado is in Play” is the new “This is What Momentum Looks Like.”

Back in October 2017, supporters of then-gubernatorial candidate George Brauchler were inexplicably crowing that “this is what momentum looks like” after their candidate raised less than $100k in the third quarter fundraising period and picked up a handful of endorsements from law enforcement types in Colorado. About a month later, Brauchler dropped out of the race for Governor in order to run for Attorney General; Democrat Phil Weiser went on to handily defeat Brauchler in November 2018, giving Brauchler TWO statewide defeats in the same cycle.

Brauchler’s lack of momentum was as obvious at the time as it was in hindsight, and that story was the first thing that came to mind on Tuesday when new numbers for the 2022 races for Senate and Governor were released by a notorious right-wing polling outfit. We’ll get to those polling results in a moment, but the response from the campaign of GOP Senate candidate Joe O’Dea was to gleefully repeat the idea that “Colorado is in play.”

This is not new, of course. Here’s longtime Republican (cough, “Unaffiliated,” cough) consultant Rob Witwer making the same declaration back on June 9:

You’re probably wondering at this point if Colorado is truly “in play” in 2022. That depends a lot on your definition of “in play,” and to answer that question, we need to address those new polling numbers from Trafalgar Group released on Tuesday.

Trafalgar Group is a polling outfit that is well known for being exceedingly optimistic about Republican chances in most of their pre-election surveys. This doesn’t necessarily mean that Trafalgar is wrong in its polling data, but you do need to take their findings with at least a few grains of salt. Robert Cahaly, Trafalgar’s main pollster, famously insisted in late 2020 that then-President Trump was going to win re-election because “social desirability bias” meant that there were a large number of “shy Trump supporters” who weren’t showing up in everybody else’s polling data. As The New York Times wrote on Nov. 8, 2020:

Trafalgar does not disclose its methods, and is considered far too shadowy by other pollsters to be taken seriously.

Trafalgar Group does not have much of a history in Colorado. The last time — and perhaps the only time — Trafalgar released a public poll in Colorado was in 2016, when they showed numbers just before Election Day that indicated Democrat Hillary Clinton was ahead of Republican Donald Trump by just 0.4%. Clinton ended up carrying Colorado by about 5 points. There are a couple of other oddities in Trafalgar’s new Senate and Governor polls in Colorado in 2022, but here’s what they claim as of Tuesday: 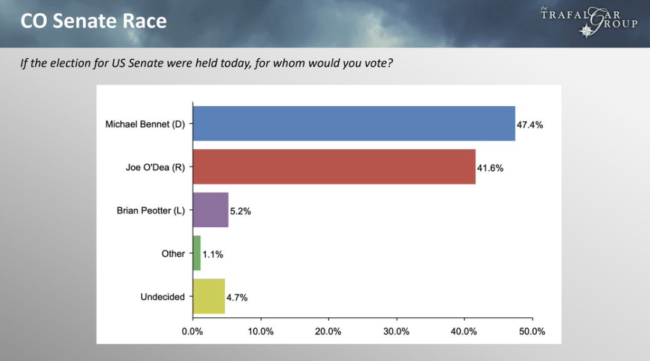 In the race for U.S. Senate, Trafalgar has incumbent Democratic Sen. Michael Bennet leading Republican challenger Joe O’Dea by about 6 points. Last week, well-known conservative pollster McLaughlin and Associates showed Bennet leading O’Dea by 8 points. In short, the most conservative pollsters available can’t figure out a way to come up with numbers showing O’Dea to be within 6 points of Bennet.

Trafalgar has O’Dea doing slightly better than McLaughlin, but Trafalgar also shows Libertarian candidate Brian Peotter polling at 5.2%. Going back to 2010, the only third-party candidate to even cross 3% in a Colorado Senate race was Libertarian Lily Tang Williams, who garnered 3.6% of the vote in 2016.

Trafalgar’s polling in the race for Governor is also quite strange. See if you notice what’s missing below: 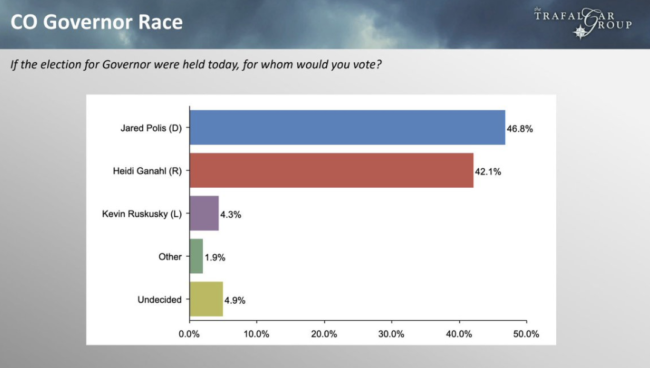 But there is a significant hole in these results. American Constitution Party nominee Danielle Neuschwanger, a former Republican candidate for Governor, isn’t even mentioned in this poll. Neuschwanger isn’t going to win in November, but she’ll at least get enough votes to register a couple of percentage points; logic would dictate that most of those votes will come from Ganahl, and not Polis. Back in March, when Neuschwanger was still a Republican candidate for Governor, she was actually performing better than Ganahl in the only publicly-available poll at the time.

Public polling from other sources has shown that both Polis and Bennet are well ahead of their respective opponents. Recent polling has also shown that the race in Colorado’s newest Congressional district, CO-08, is a dead heat; if Republicans aren’t doing better in deep-red parts of the state like Weld County, then they are certainly in trouble in less-advantageous areas such as Denver, Jefferson, and Arapahoe counties.

Mail ballots start going out in Colorado in less than two months. There is still time for plenty of changes in the top-ticket races for Senate and Governor. Is Colorado really “in play” for O’Dea and Ganahl, respectively? Technically…sure.

Realistically…let’s just say this is not what momentum generally looks like.