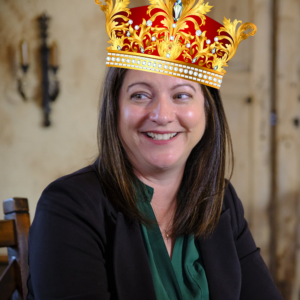 Jan Kulmann will get medieval on your seat.

As the Denver Post’s John Aguilar reports today, a power play earlier this year by Thornton Mayor Jan Kulmann–now running for the Republican nomination in Colorado’s brand-new Eighth Congressional District–is continuing to cause lots of controversy in that northern Denver suburb. Kulmann likes to say in campaign forums that she’s a mayor “in her spare time,” but whatever time she does spend appears to be spent on Game of Thrones-style intrigue:

Thornton faces a pair of citizen-initiated lawsuits that have so far cost the city more than $50,000 to fight — a situation that a group of residents blames on what they’ve dubbed the “Bully Bloc of Five” on the City Council.

“The root of the discontent with City Council is their code of conduct and their obnoxious behavior,” said Karin Baker, a nearly 20-year resident who filed suit over the council’s decision in February to oust former Councilwoman Jacque Phillips from her seat. “It’s a clown show.”

The council, by a 5-4 vote, determined that Phillips was no longer a resident of Thornton after she bought a home and took a job in southern Colorado.

“This is an opportunity for them to work really hard a vacate the seat,” Phillips told FOX31 ahead of the council meeting Tuesday night. “It’s no secret that the relationship with myself and the mayor and the mayor pro tem has not been good.”

Phillips, an attorney, took a job as a director for a program in the San Luis Valley last July. She said she got a place down there because buying property is more affordable than renting.

“I’m also licensed to practice in D.C. I’ve done a lot of work in Aspen as well,” Phillips said. “I know where they are coming from. It has nothing to do with the residency, it’s a power grab. It’s political. Certainly, there’s nothing wrong with council members working outside of the City of Thornton.”

In the era of telecommuting there’s certainly nothing unreasonable about people taking jobs in geographically far-flung locations, and there’s an argument that if we were to stop taking officials on their honor with respect to their “primary” residence among more than one they may own a lot of officials on both sides would get caught in that dragnet. What this looks like and the lawsuit alleges is that all Jacque Phillips is guilty of is supplying Kulmann and the “bully bloc” on the Thornton City Council with the thinnest of pretexts to override the vote constituents who elected her.

Looking at Kulmann’s power play on the Thornton City Council in context with what newly-ensconced Republican majorities are doing in Aurora and Douglas County, there’s a common thread of…well, ruthlessness in which the normal way of doing business is only adhered to if it serves the political goals of these power-hungry conservative cabals. Those who don’t cooperate wind up with all kinds of bad things happening to their careers.

Anyway, keep this all in mind next time Jan Kulmann tells you she’s some kind of doe-eyed “outsider.”

She knows enough about dirty politics to play them.