Judge Ketanji Brown Jackson’s confirmation to the United States Supreme Court is a joyful, historic moment. Judge Brown Jackson’s qualifications, experience and perspective have prepared her for the profound honor of serving on our highest court and I couldn’t be more proud that the United States Senate confirmed her appointment today. Whether it’s at the legislature or on the Supreme Court, representation matters. I stand in awe of Judge Brown Jackson’s ability to stare adversity in the face and rise above with grace to achieve this historic milestone. While today is an important day in Black history, it is also an important day in American history. Today, America confirmed our 116th Supreme Court Justice, and she is a Black woman. 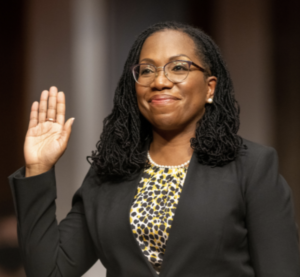 The Senate voted Thursday to confirm Judge Ketanji Brown Jackson to the Supreme Court, felling one of the most significant remaining racial barriers in American government and sending the first Democratic nominee to the high court in 12 years.

Jackson, a daughter of schoolteachers who has risen steadily through America’s elite legal ranks, will become the first Black woman to sit on the court and only the eighth who is not a White man. She will replace Associate Justice Stephen G. Breyer after the Supreme Court’s term ends in late June or early July.

As expected, the only three Republican Senators to vote for Jackson were Susan Collins, Lisa Murkowski, and Mitt Romney.