Sorry Heidi: There Is No GOP “Leading Candidate” For Governor

An announcement from Colorado Republican gubernatorial candidate Heidi Ganahl about a “gubernatorial forum” tonight in Colorado Springs struck us with its newly-added presumptuous tagline: 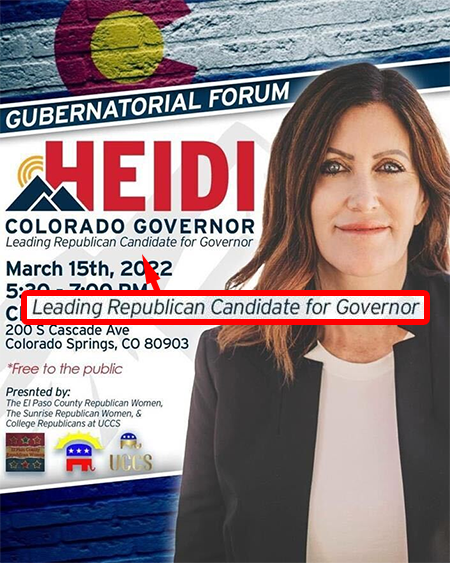 As you can see, Ganahl is now billing herself as the “leading Republican candidate for governor.” In the advertising world, “leading,” like “best-selling,” is a claim you’re supposed to be able to justify with hard metrics–otherwise it’s better to go with more vague superlatives like “fastest-growing” that don’t necessary imply they are actually, you know, #1.

Not to mention the age-old saying: “if you have to say you are, you aren’t.”

But that got us thinking in all fairness: what’s the metric by which Heidi Ganahl could plausibly justify calling herself the “leading candidate?” There’s only one head-to-head matchup poll that’s been done pitting Ganahl and her upstart Republican opponent Danielle Neuschwanger against incumbent Gov. Jared Polis, and in that poll Neuschwanger performed better against Polis than Ganahl.

At last week’s candidate forum in DougCo, Ganahl reacted poorly to this being pointed out:

Would the metric Heidi is relying on be fundraising, then? Ganahl has technically raised the most of the Republican primary pack, but by any objective scale her fundraising has been extremely anemic compared to other Republican primary candidates in Colorado running for U.S. Senate and even congressional races. Ganahl certainly hasn’t demonstrated the fundraising ability to distinguish herself beyond the resources any Republican nominee could reasonably expect to start flowing after the primary.

So if it’s not polling and not fundraising, which most people would call the two most important benchmarks, where else can Ganahl point to justify her claim to be the “leading candidate for governor?” It’s not social media footprint either. Danielle Neuschwanger has well over twice the number of Twitter followers as Ganahl. Then we went over to Ganahl’s Youtube page to see how her overproduced campaign videos are going over: 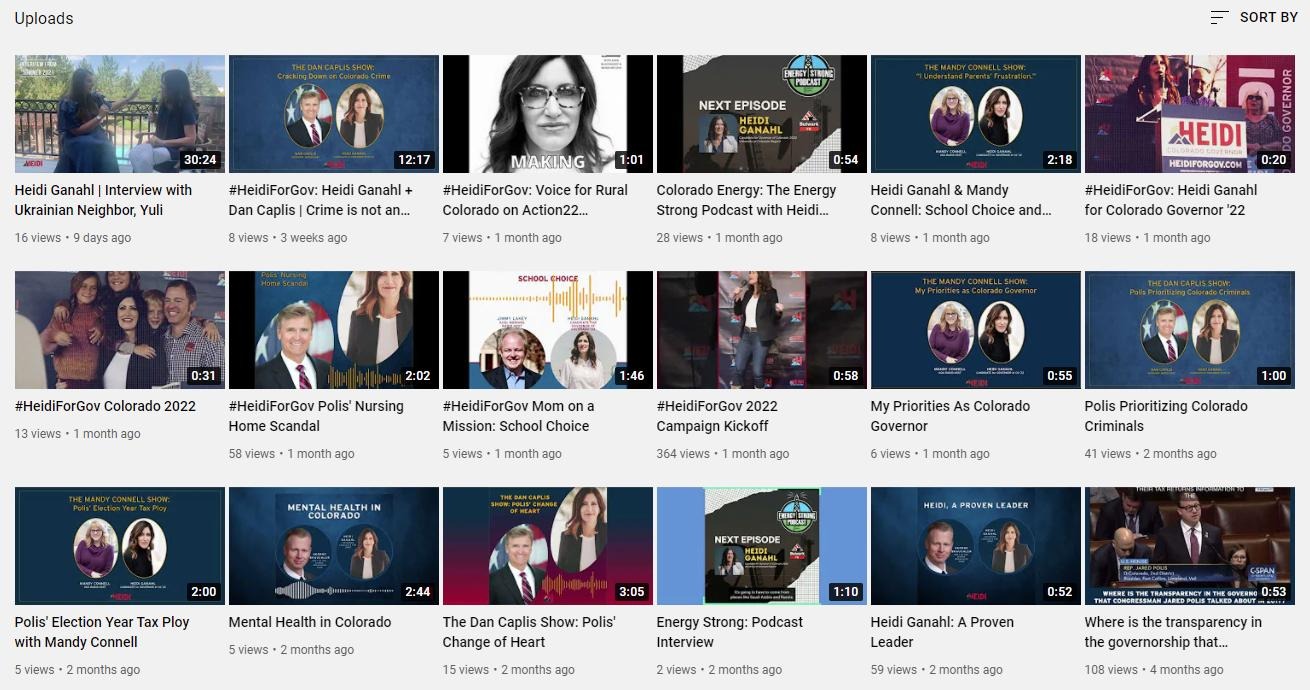 We’re sorry to report that virality…has not been achieved! After a months-long controversial “podcast tour” to pre-launch her campaign and months since then on the trial, Ganahl has by no metric we can identify emerged as the “leading candidate,” or even minimally caught on as a contender in the race. That reflects a massive amount of wasted time and effort trying to build Ganahl’s name ID over the past year, results that Neuschwanger can undo with a few Lauren Boebert-style potshots.

Then just yesterday, the latest sign of “strength” came via the Colorado Sun’s Sandra Fish, reporting that Ganahl has turned in a perilously narrow margin of petition signatures, and as a result will be participating in the GOP’s state assembly next month as insurance for even making the primary ballot:

And #cogov candidate @heidiganahl submitted 16,487 signatures on her petition, which requires 1,500 from each of eight congressional districts. News release says she’ll also participate in assembly. #copolitics

Ganahl claims to have performed some kind of secondary vetting of her collected signatures, but that’s still a far smaller margin than U.S. Senate candidate Joe O’Dea afforded himself by turning in over 23,000 voter signatures to validate. Would you call a candidate who fails to collect enough signatures after taking that route to qualify for the ballot and then has to play catch-up at assembly a “leading candidate?”

The increasingly undeniable truth is that Ganahl’s unexpected but profound weakness as a candidate has created a genuine opening for the relatively unknown Danielle Neuschwanger, and Ganahl is going to have to struggle all the way to June 28th for this nomination. We do expect that if Ganahl is forced to face off against Neuschwanger at the GOP state assembly she’ll get the required 30% to stay in the race–but there’s also a decent chance that Neuschwanger will beat Ganahl at the assembly. It will be even nore difficult to call Ganahl the “leading candidate” with a straight face after that.

In the event, just remember as usual that we said so.