Pam Anderson is No Tina Peters, Which Cuts Both Ways

“Peters has proven herself, with both her actions and her support of extremists, to be wholly unworthy of public trust and public office.”

Embattled Mesa County Clerk and Recorder Tina Peters announced on Monday that she is running for the Republican nomination for Secretary of State rather than seeking re-election in 2022.

On Tuesday, the editorial board of The Denver Post responded with a nearly-1,000 word blasting that could be summed up in two words: “HELL NAW.”

We should not be laughing at Tina Peters.

Yes, it’s hard. She was caught on video attempting to kick a police officer in a downtown Grand Junction bagel shop just days before she announced a run for secretary of state.

But Tina Peters is not funny. She’s dangerous.

Peters is part of a growing base of radicalized individuals attempting to undermine America’s democracy, tear apart our republic and destabilize our local, state, and federal governments. She attended a public event on Thursday night in Castle Rock where 9News reporter Marshall Zelinger captured on video an election conspiracy theorist making a direct threat to the current Colorado secretary of state – Peters’ opponent should she win the Republican nomination. 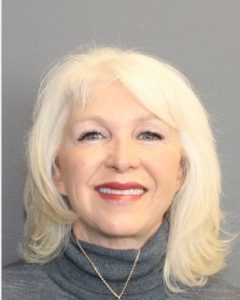 We’ll quibble with one small part of this intro: We absolutely should be laughing at Tina Peters…just maybe in more of a nervous chuckle sort of way.

It is, of course, completely absurd that someone who is under investigation — by everyone from the local District Attorney to the FBI — for breaking into Mesa County’s election computers could possibly argue that they should be put in charge of elections for the entire State of Colorado. It is equally ridiculous that the Republican nominee for U.S. Senate could be a guy in Ron Hanks who says openly that Donald Trump was the real winner of the 2020 Presidential election, but here we are.

The less-crazy wing of the Colorado Republican Party is trying to promote former Jefferson County Clerk and Recorder Pam Anderson as a rational alternative to incumbent Democrat Jena Griswold.

For her part, Anderson tried on Monday to make the argument that she should be trusted with the GOP nomination instead of Peters: 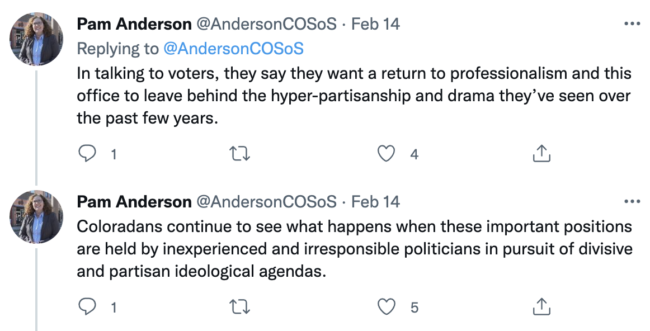 Anderson makes some valid arguments, but there may not be enough moderate Republicans left in Colorado who are willing to listen. Even if there were, it’s not at all clear that Anderson will be able to reach them before the June Primary Election.

When Peters announced her run for SOS on Monday, it was a national story picked up by the likes of CNN, The New York Times, The Washington Post, NBC News, and many others. When Anderson took to Twitter for her response, she was met with this:

Ooof. Tina Peters makes national headlines by being Tina Peters. Local reporters, meanwhile, don’t even know how to reach Pam Anderson, which is not a good sign for her fledgling campaign.

For years, Republicans tried to convince Anderson to take a shot at higher office to no avail. Anderson may have picked the wrong year, and the wrong political party, in which to finally make that leap.