Responding to the news yesterday that one of the leading figures among the far-right freshman Republican congressional waste products of the MAGA movement, Rep. Marjorie Taylor Greene, has been permanently suspended from Twitter for “repeated violations” of the site’s COVID-19 misinformation policy, Rep. Lauren “Q*Bert” Boebert of Colorado issued what sure looks to us like a threat of retaliation in the event Republicans retake control of the U.S. House this November: 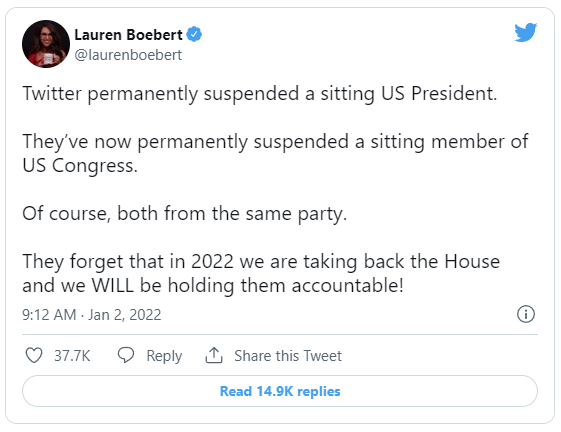 Once again Rep. Boebert seems to have confused the very different ideas of speech being criminalized versus merely subsidized, the former Twitter having no power to do and the latter Twitter having no obligation. As for threatening a major social media company with unspecified retaliation for exercising their own rights, if we were Twitter we would tell Boebert to take her complaints to Gab–maybe encouraging that transition with a suspension that Boebert’s own fount of misinformation certainly qualifies her for.

Don’t look for Boebert to push Twitter too hard, though. Without Boebert’s 829,000 followers on the platform, she’s a sideshow without an audience. As much as Boebert complains, losing her Twitter account would be a devastating blow to her media footprint.

With that in mind, we expect the threats from Boebert against the platform that helped make her famous to remain vague.