Get More Smarter on Tuesday (Nov. 2) 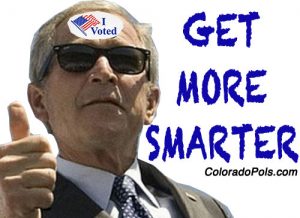 The last time that Election Day fell on Nov. 2 was in 2010; how’s that for obscure trivia? Let’s Get More Smarter. If you think we missed something important, please include the link in the comments below (here’s a good example). If you are more of an audio learner, check out The Get More Smarter Podcast. And don’t forget to find us on Facebook and Twitter.

► Today is Election Day! If you still have a ballot sitting at home, DO NOT drop it in the mail!!! You MUST take your ballot at a certified drop box location before 7:00 pm tonight (postmarked dates are irrelevant; ballots must be received before 7:00). Visit GoVoteColorado.com to locate a ballot drop box near you. Colorado Public Radio has more on Election Day in Colorado.

As The Washington Post reports, all eyes nationally will be on two East Coast states:

Voters are headed to the polls Tuesday to pick governors in Virginia and New Jersey, offering a test for Democrats in the first major elections since President Biden’s arrival in the Oval Office and a possible preview of what’s to come in next year’s congressional midterms.

In Virginia, polls have showed a toss-up between Democrat Terry McAuliffe and Republican Glenn Youngkin in a state Biden carried by 10 percentage points. In New Jersey, Gov. Phil Murphy is seeking to turn back a challenge from Republican Jack Ciattarelli and become the first Democratic governor reelected in the Garden State in more than 40 years.

Greg Sargent of The Washington Post has more on the dark campaign tactics of Youngkin in Virginia.

Gov. Jared Polis on Monday laid out his desires for a $40 billion budget in fiscal year 2022-23 — a 4% increase from this year and a state record.

The amount of money in the budget is dictated by economic conditions, not the governor’s own politics. [Pols emphasis] Such growth in next year’s budget is possible as a result of the state’s faster-than-expected recovery from the pandemic-induced recession of 2020. Just last year, Polis signed a 2020-21 budget of only $30 billion — the total was later adjusted upward — as state analysts were warning of more lean budgets to come.

But their dire predictions have not come true. In September, state economic analysts told the legislative Joint Budget Committee that they project the state legislature will have $15.3 billion to spend out of the General Fund (which covers education and health care spending, among other areas) for the fiscal year that ends June 30. That’s a 7.2% increase from last fiscal year, and the analysts forecast increases of about 4% through at least the 2023-24 budget.

Polis touted his proposed budget for the 2022-23 fiscal year as being responsive to voter concerns.

9News has more on the budget priorities outlined by Polis on Monday.

► Governor Jared Polis ordered a temporary stop to most cosmetic medical procedures in Colorado as the state continues battling the COVID-19 pandemic. From The Denver Post:

Colorado’s COVID-19 hospitalizations continued rising over the weekend as Gov. Jared Polis issued multiple public health orders to try to save beds — including one that halted cosmetic procedures for a month.

While the number of people hospitalized for COVID-19 is lower than it was at the December peak, the state has fewer beds available, because more people are seeking care for other severe health problems, and some staff have gone to other states or left the health field.

In other COVID-19 news, millions of doses of vaccines intended for children ages 5-11 are already being shipped nationwide. The US Centers for Disease Control and Prevention will vote today on whether to formally allow vaccinations for young children.

► World leaders announced a new plan to limit emissions in combating the negative effects of Climate Change. From The New York Times:

Nations around the world joined together Tuesday to promise to curb emissions of methane, a potent greenhouse gas that spews from oil and natural gas operations, livestock production and landfills and can warm the atmosphere 80 times as fast as carbon dioxide in the short term.

President Biden, calling the agreement a “game-changing commitment,” also announced that for the first time, the Environmental Protection Agency intended to limit the methane coming from existing oil and gas rigs across the United States.

The federal government previously had rules that aimed to prevent methane leaks from oil and gas wells built since 2015, but the Trump administration rescinded them. President Biden intends to restore and strengthen them, administration aides said.

The announcement, at the United Nations climate summit in Glasgow, came as Mr. Biden faces intense pressure internationally and at home to show that the United States, the nation that has historically pumped the most greenhouse gases into the atmosphere, is serious about mitigating climate change.

Ursula von der Leyen, the president of the European Commission, said cutting methane emissions was “one of the most effective things we can do” to slow global warming.

► As Ernest Luning reports for the publication formerly known as the Colorado Statesman, the infighting within the El Paso County Republican Party is neverending:

The vice chairman of the El Paso County Republican Party is calling for Vickie Tonkins, the party’s chairwoman, to “resign or be removed” after she sent a scathing email to county Republicans that began with an encouragement to vote in Tuesday’s election but quickly veered into an extended attack on the organization’s No. 2 officer, a GOP state lawmaker and a longtime party volunteer.

After urging fellow county Republicans to “VOTE! VOTE! VOTE!” in an Oct. 21 email, Tonkins pointed to results of a controversial school board candidate survey that included questions about voting equipment and whether the candidates support a “full forensic audit” of the 2020 election.

The survey, distributed last month by Tonkins, sparked a backlash by the county party’s executive committee — made up of GOP officers and elected officials, it’s essentially the county party’s board of directors — who voted to send a different survey with questions they said were more pertinent to school board races, including about school choice and civics education.

Calling them “establishment insiders,” Tonkins wrote in the email that three members of the executive committee — county party vice chair Karl Schneider, former county chairwoman Kay Rendleman and state Sen. Larry Liston, R-Colorado Springs — had tried to “hijack, and block this survey” to prevent candidates from “being exposed on where they stand on election integrity.”

When Tonkins was re-elected as El Paso County Republican Party Chairperson earlier this year, it was amidst much discussion about alleged irregularities in the voting process.

► Judith Kohler of The Denver Post reports on a rise in activity for labor unions in Colorado, including organizing at a HelloFresh facility in Aurora; Spruce Confections in Boulder; John Deere & Co.; Nabisco; and Denver International Airport.

In related news, airport security workers at DIA reached agreement on a new contract and avoided going on strike.

► As The Associated Press reports, Republicans across the country are waiting to see if a focus on local school board elections will pay off tonight:

School board races, once sleepy and localized, have become the new front in a culture war raging across the nation as resentments over COVID-19 restrictions and anti-racism curriculum reach a boiling point.

On Tuesday, voters weigh in on dozens of races that have been dominated by debates over masks, vaccines, race and history. The outcomes will decide not just districts’ policies but also whether the education fight has staying power as part of the national discourse and becomes a rallying issue for Republicans in the 2022 midterms.

► As Colorado Public Radio reports, police officers and paramedics involved in the death of Elijah McClain made brief court appearances in Aurora on Monday.

► Sure, it’s TOTALLY normal for a sitting Member of Congress to talk about blowing shit up at the U.S. Capitol building.

► As POLITICO reports, Democrats are looking at Thanksgiving as a goal for finalizing social spending and infrastructure plans.

► Vox.com reports on the unusual alliance that could splinter support for the Texas abortion ban.

This is pretty much the only obvious response:

► Sean Parnell, a leading Republican U.S. Senate candidate in Pennsylvania who has been endorsed by Donald Trump, is being accused of some pretty awful things by his estranged wife. From The Philadelphia Inquirer:

The estranged wife of Republican Senate candidate Sean Parnell testified under oath Monday that he choked her until she bit him to escape, that he hit their young children, and that he lashed out at her with obscenities and insults.

In tearful testimony, Laurie Snell told a family court judge that her husband once called her a “whore” and a “piece of s—” while pinning her down. On another occasion, she said, Parnell slapped one child hard enough to leave fingerprint-shaped welts through the back of the child’s T-shirt. And she said he once got so angry he punched a closet door with such force it swung into a child’s face and left a bruise. She said Parnell told his child: “That was your fault.”

She also testified that after a Thanksgiving trip in 2008, he briefly forced her out of their vehicle alongside a highway after raging at her, telling her to “go get an abortion.”

In a statement released by his campaign, Parnell, a decorated Army veteran who served in Afghanistan and was endorsed this summer by former President Donald Trump, vigorously disputed his wife’s claims, calling a number of them “lies” and said he was looking forward to rebutting them when he presents his case next week. 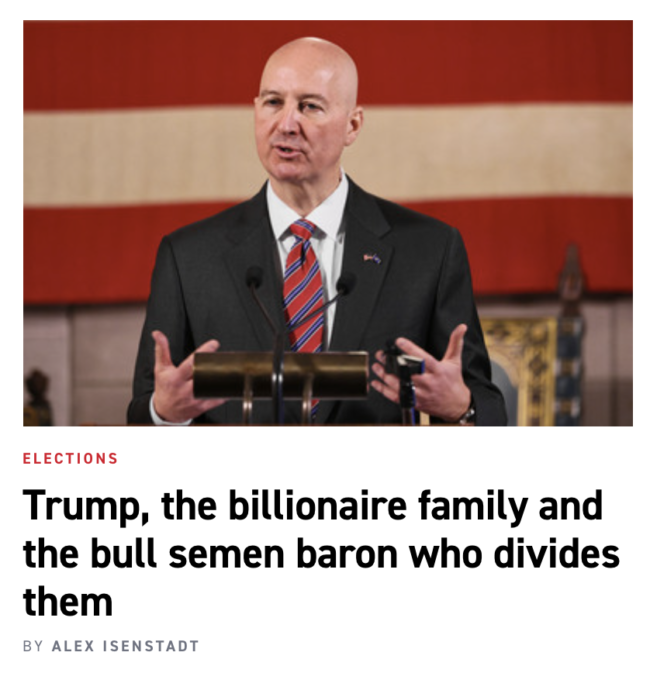 ► This isn’t a great message for Rep. Lauren “Q*Bert” Boebert to be carrying on behalf of the Republican Party. Remember: The majority of Americans believe that abortion should be legal in all or most cases. 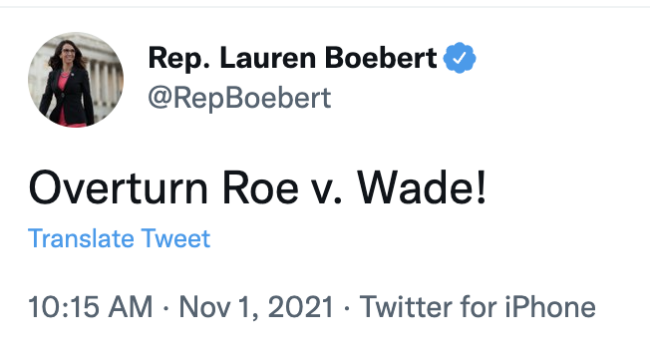 Some other Colorado Republicans have been less interested in addressing Roe v. Wade directly in speaking about the issue of abortion. Gubernatorial hopeful Heidi Ganahl says only that she is “pro life,” while some of the GOP candidates for U.S. Senate have generally tried to avoid the topic.

► The Washington Post details “187 minutes of inaction” in breaking down former President Trump’s lack of response during the Jan. 6 insurrection.