Tina Peters’ case lies at the hands of the District Attorney’s investigation, and Commissioners are ready to move on. “They’ve made up their mind that I am guilty,” Peters said.

“We’re trying to do everything we can in a positive fashion to make sure this never repeats itself, but your weakest link and the one we least suspected would hack the computer was the clerk herself,” McInnis said. [Pols emphasis]

As Clerk Tina Peters and majority of Mesa County await the findings of the FBI, the state and the DA’s investigations, all eyes are on this Novembers election. “We’ve got some court findings and the facts are pretty clear and it does not support the allegations that Tina has made,” McInnis said.

As the Grand Junction Sentinel’s Charles Ashby reports, last night’s regularly scheduled meeting of the Mesa County Board of Commissioners devolved into the usual chaos we’ve come to expect from months of backlash from far-right residents against public health restrictions to combat COVID-19, even the most gentle persuasive efforts to get residents vaccinated, and most recently in defense of embattled Mesa County Clerk Tina Peters under criminal investigation for allowing election system data to be leaked to conspiracy theorists who proceeded to find nothing nefarious–or even with their limited knowledge, intelligible.

But last night was different in the crucial respect that Clerk Peters personally showed up to join in the heckling:

[I]n response to comments from her and other county residents, Commissioner Scott McInnis tried to set the record straight about what the county has had to do in dealing with Peters’ removal as elections chief and the ongoing criminal investigations against her for alleged breaches in election security protocols by local, state and federal law enforcement agencies.

“The clerk has admitted facts that she now apparently denies at different points, but her attorney in this (court) proceeding admitted to certain facts,” McInnis said, reading a few paragraphs from Judge Valerie Robison’s ruling earlier this month that temporarily removed her as the designated election official, a decision that was upheld by the Colorado Supreme Court when it declined last week to hear Peters’ appeal, affirming former Secretary of State Wayne Williams and Mesa County Treasurer Sheila Reiner to oversee the fall election. 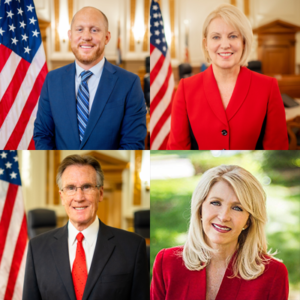 The relationship between Clerk Peters and the all-GOP Mesa County Board of Commissioners has been deteriorating ever since the scandal over the breach of security in Peters’ office broke back in August. After Peters spent weeks in hiding and then returned to work like nothing happened that relationship appears to have fully soured, with semi-retired ex-Rep. Scott McInnis citing the ruling from Judge Valerie Robison that both Peters and her deputy Belinda Knisley “have committed a breach and neglect of duty and other wrongful acts” that warranted their removal from duties overseeing elections in Mesa County. Another longtime Republican fixture on the Mesa County Board of Commissioners, former GOP Lt. Gov. candidate Janet Rowland, is now the target of an incipient recall effort for her failure to support Clerk Peters committing what they concede were “well-meaning” crimes to prove that Trump won the election.

McInnis even took Peters to task over an incident we covered in detail earlier this month:

McInnis ended the meeting calling on the clerk to issue a public apology to county resident Matt Crowe, saying she falsely accused Crowe of pushing Peters’ supporter Roxanne Lewis at a Stand With Peters rally on the steps of the Mesa County Old Courthouse earlier this month.

The commissioner said videos of the event clearly show that never happened.

Like we said the day it happened, McInnis is absolutely right–though neither Peters nor her angry mob of supporters wanted to hear any of it. The enmity between the all-Republican elected board of commissioners in Mesa County and their radicalized Republican base who have gravitated to Clerk Peters–keep in mind that 66% of Republicans according to polls believe that Peters is on a righteous quest to prove Trump should still be President–is at this point…alarmingly large? Dangerously large? It depends on whether you take these mobs’ threats of “civil war” as seriously as they do.

When the multiple criminal investigations into Peters’ office finally wrap up, this intraparty conflict is going to come to a head. If the polling that shows most Republicans support the “Big Lie” underlying this entire standoff are accurate, it may not be off base to suggest that Clerk Peters enjoys the support of a majority of rank-and-file Mesa County Republicans.

Politically, and we can only hope this stays within the realm of politics, it’s a volatile situation.