Lauren Boebert: The Sublime And Not So Much 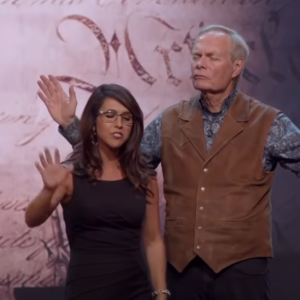 “God wants us to be involved in the affairs of government,” said U.S. Rep. Lauren Boebert, a Republican from the Colorado’s 3rd Congressional District and a keynote speaker.

“There are some things that are unjust that are taking place that God wants to make right,” she said. “He’s going to use his church, his children to infiltrate these people. … [Pols emphasis] They just don’t know they are being deceived…”

“It’s time we take what we know about the word of God and run with it,” said Boebert, who has become controversial for her outspoken conservative stances. “We don’t need to sit back and ask God, ‘Why is Nancy Pelosi being so mean today?’ We need to take the word of God and the promises he provides for us and go forward.”

Boebert said she’s working on presenting articles of impeachment on President Joe Biden and wants to remove Pelosi, a Democrat from California, from her position as U.S. House Speaker, saying they aren’t doing their jobs properly.

None of that is going to happen, of course, though Boebert’s choice of words in describing herself as an “infiltrator” in Congress do make a strange–and by that we mean more than a little unsettling–kind of sense. 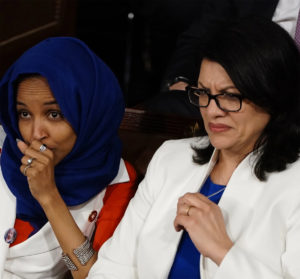 But as the Staten Island Advance’s Paul Liotta reports from another event headlined by Rep. Boebert on September 2 in New York City’s coziest (and most conservative) borough, all that religious talk has an ugly side depending on the audience:

After characterizing Rep. Alexandria Ocasio-Cortez (D-Queens/the Bronx) as a person who is wrong but has a heart filled with “rainbows and unicorns,” she described Rep. Rashida Tlaib and Rep. Ilhan Omar as “black-hearted, evil women who want to destroy our country” [Pols emphasis] — an opinion some members of the crowd greeted with applause…

Boebert suggested that she, the staffer, and Omar were alone in an elevator together. She didn’t press the emergency break, as a member of the Sept. 2 audience suggested, but said she looked over at Omar to make a disparaging remark.

“Look it there. It’s the ‘jihad squad,’” she said she told her staffer.

As you can see, Rep. Boebert’s spiritual journey is not focused on interfaith dialogue.

Referring to colleagues of color as “black-hearted evil women” puts a stop to…well, any dialogue.

It’s difficult to argue that Lauren Boebert is doing what Jesus would do.