Get More Smarter on Friday (Sept. 10)

It’s going to be really, really hot outside in Colorado…unusually hot, in fact. Let’s Get More Smarter. If you think we missed something important, please include the link in the comments below (here’s a good example). If you are more of an audio learner, check out The Get More Smarter Podcast. And don’t forget to find us on Facebook and Twitter.

► President Biden on Thursday announced new COVID-19 vaccine requirements for all federal workers and a choice for for companies with more than 100 employees to require either vaccines or weekly testing procedures. As The New York Times reports:

Dr. William Schaffner, an infectious disease expert at Vanderbilt University, said the policy was necessary, and likened it to military service in a time of war.

“To date, we have relied on a volunteer army,” Dr. Schaffner said. “But particularly with the Delta variant, the enemy has been reinforced, and now a volunteer army is not sufficient. We need to institute a draft.”

Amazon, which will be shipping Covid-19 testing kits at cost, said it was proud to help with the plan.

“We know vaccines, coupled with widespread and convenient testing, serve as powerful tools to help slow the spread of Covid-19 in our communities, keeping the U.S. economy open, and protecting America’s work force,” said Brian Huseman, vice president of public policy for the retailer.

Biden’s vaccination requirement plan comes amid new reports from the CDC that unvaccinated people are 11 times more likely to die of COVID-19 than their vaccinated counterparts. That didn’t stop the Colorado Republican Party from going all “freedumb”: 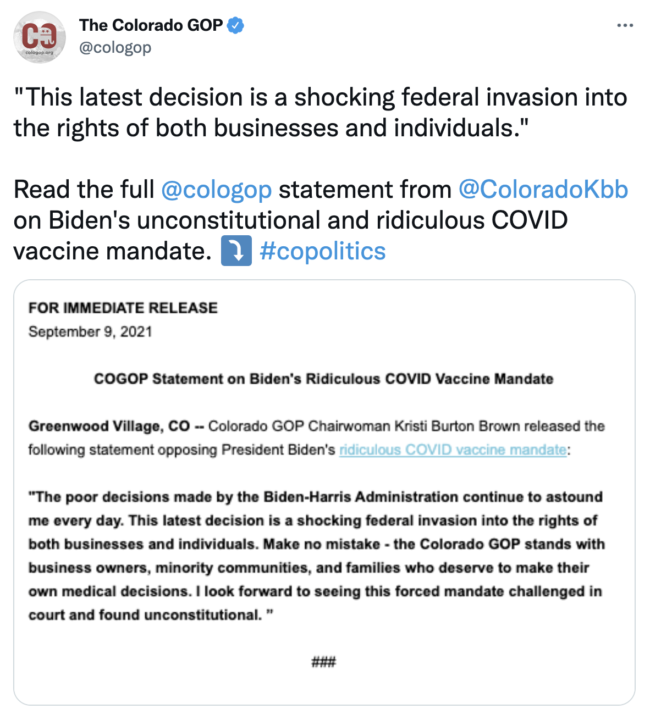 President Biden is telling Republicans complaining about a vaccine requirement to “have at it.”

► Denver7 has more on how the new vaccine mandates might affect Colorado companies.

► The movement by Colorado Republicans to opt-out of an open primary in Colorado gained more momentum. As The Colorado Sun reports in its “Unaffiliated” newsletter:

Secretary Marilyn Harris joined Vice Chair Priscilla Rahn in calling for the Colorado GOP’s executive committee to vote Sept. 18 to cancel the primaries and let candidates go through the caucus and assembly process instead.

“After studying all the facts and considering both sides, it is clear that the best option for Colorado Republicans is to opt out of the corrupt open primary system that dishonest Democrats unfairly administer,” Harris wrote in a letter last week. “If we opt out, we ensure election integrity by stopping crooked Democrats from corrupting our nomination elections.”

This is really not a good idea for the GOP, as many more moderate Republicans have pointed out recently. And as The Sun notes:

The vote that could end Republican participation in an open primary system is scheduled for next Saturday, Sept. 18. Those who seek to get out of the open primary process could get some dubious “discounted” legal advice.

► As a CU Regent, Heidi Ganahl is currently the sole statewide elected official for the Republican Party. After months of trying to raise her name ID and pondering different campaign scenarios, Ganahl appears to at last be nearing a formal announcement that she will run for Governor in 2022.

► President Biden will visit Denver on Monday as part of his “Build Back Better” tour. Details on Biden’s specific destination are still being finalized.

► As Salon.com reports, gun safety is more of a theory than a practice in the household of Rep. Lauren “Q*Bert” Boebert:

In a video reviewed by Salon and apparently recorded on July 25, the 8-year-old son of Rep. Lauren Boebert, R-Colo., can be seen singing, dancing and playing with cigarette lighters — while left alone in a room a few feet away from a high-capacity rifle. This would appear to violate a new Colorado state law, under which gun owners are required to store their deadly weapons in a gun safe, with a trigger or cable lock, whenever the owner is aware, or should reasonably be aware, that a “juvenile or a resident who is ineligible to possess a firearm can gain access to the firearm.”…

…In the July 25 video, Boebert’s son is seen dancing alone in that same bedroom, close to a weapon that appears to be one of the same rifles seen loaded during the February Zoom call. It’s in a different position in the July video, leaning casually against the headboard of a bed, near what appears to be a handgun lying on the floor.

We can only hope that Boebert’s lax attitude toward gun safety doesn’t end up hurting someone.

► Since we’re on the subject of Boebert, the Rifle Republican made it clear on Thursday that she wants NOTHING to do with a potential 2022 matchup against Democratic Congressman Joe Neguse.

Meanwhile, Colorado Public Radio reports that Boebert is proving to be a fundraising powerhouse FOR DEMOCRATS.

► Former Mesa County Commissioner Rose Pugliese is very salty about her decision to not seek the Republican nomination for Secretary of State in 2022.

► As Erica Hunzinger writes in The Denver Post political notebook “The Spot,” there are changes coming to how the newspaper covers politics:

The politics team is among those that have changed, most notably with Conrad Swanson moving from covering Denver city politics to covering environmental issues, and Joe Rubino coming over from business to fill Conrad’s shoes…

…We’d also like to extend our gratitude to Justin Wingerter, whom you’ve read in this newsletter and all over The Denver Post for two and a half years. He’s decided to move on, and we wish him tons of luck and time to breathe.

With his departure, the entirety of The Post’s politics team will be taking over coverage of the state’s congressional delegation, federal entities and redistricting.

► As POLITICO reports, Congress is having as much trouble filling staff positions as every other employers in the country.

► As Colorado Newsline reports, the man appointed to oversee Mesa County Elections STILL hasn’t heard from Mesa County Clerk and Recorder Tina Peters, who faces multiple investigations over security violations and hasn’t been seen in Colorado for more than a month now.

► 9News reports on a significant rise in COVID-19 infections from school districts across the state.

► The Grand Junction Daily Sentinel reports on new drilling projects approved for Terra Energy Partners. Reporter Dennis Webb doesn’t bother to mention that this is the same company that is supposedly paying Jayson Boebert a half-million dollars a year for “consulting” services.

► The ongoing drought in Colorado looks a little better now but is about to get a lot worse, as The Colorado Sun explains.

► The Bureau of Land Management has stopped chasing wild horses around for the time being.

► The Denver Post looks at the trend of more companies moving to remote working options and how that could be a very good thing for Colorado’s economy.

Former Republican State Sen. Greg Brophy, who is totally not doing illegal lobbying for the GOP on redistricting, has an absolutely terrible take on vaccine requirements: 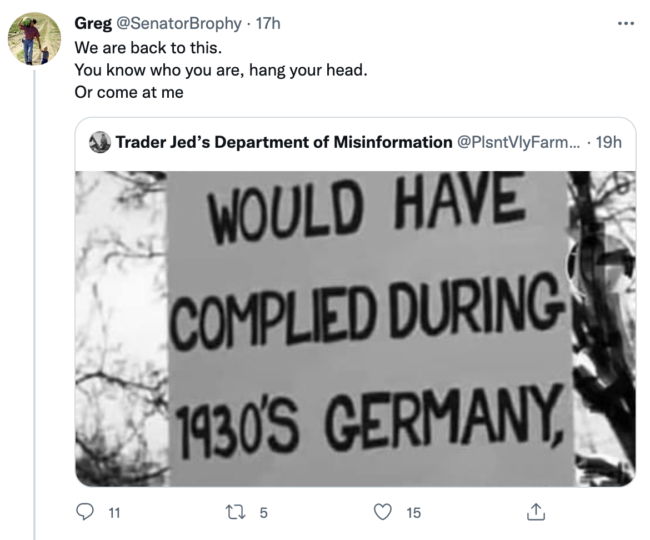 Here’s the full image of what Brophy re-Tweeted: 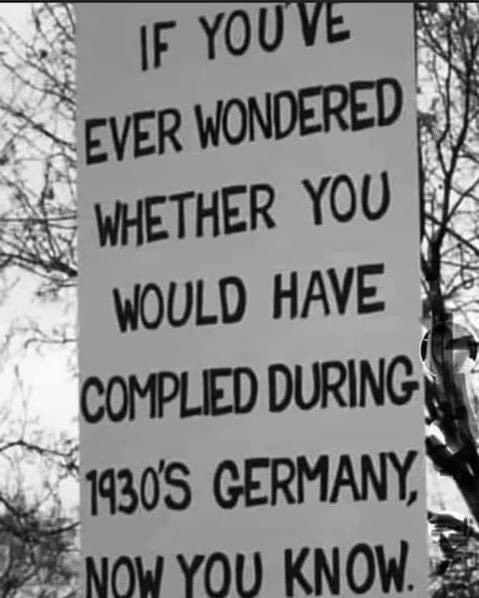 ► As The Associated Press reports, a former Kansas Republican lawmaker is being charged with COVID relief fraud:

A federal grand jury on Thursday indicted former Kansas state Rep. Michael Capps on 19 counts alleging that he tried to defraud federal, state and county government organizations out of more than $450,000 in coronavirus relief funding.

The U.S. Attorney’s office in Kansas said in a news release that Capps, a Republican from Wichita, filed forms inflating the number of employees he had at two businesses and a sports foundation, and then applied for loans to pay the non-existent employees.