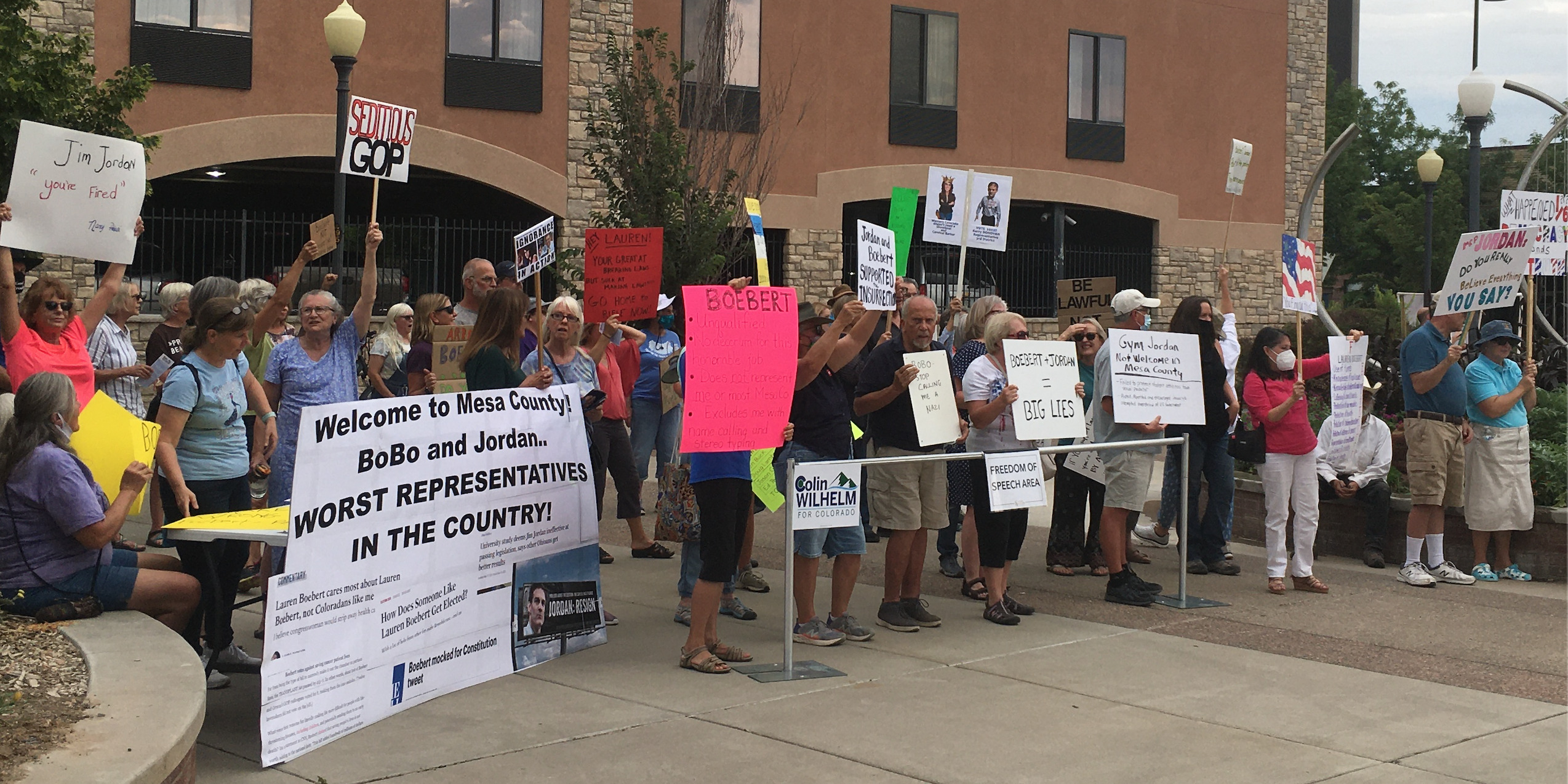 By Sharon Sullivan for the Colorado Times Recorder

U.S. Rep. Lauren Boebert (R-CO) and U.S. Rep. Jim Jordan (R-OH) attended a Mesa County Republicans fundraiser, Saturday, July 24, at the Grand Junction Convention Center, where both were slated to speak at the annual Lincoln Day Dinner that evening. Boebert was also invited to speak at Faith Heights Church the following morning during its Sunday service.

Both Members of Congress voted against certifying the Presidential election results on January 6, the day insurrectionists stormed the U.S. Capitol. Plus, Jordan has been accused of aiding and abetting a cover-up, while he was an Ohio State University assistant wrestling coach, of accusations against a university physician for sexually abusing student wrestlers from 1979 to 1997.

Approximately 50 Mesa County Democrats protested Jordan’s presence, as well as their opposition to Boebert, outside the convention center during the fundraising dinner.

Bill Richardson, a retired Grand Junction criminal defense lawyer, carried a sign saying “Gym Jordan Not Welcome in Mesa County.” He said he was compelled to attend the protest “because (Boebert) is doing absolutely nothing for the 3rd District” – a sentiment echoed by many of those who were present. “She’s into performative tweets, Facebook posts, videos, and stunts,” he said.

Protesters yelled “shame, shame,” as those attending the event walked past to enter the building.

While most attendees chose not to engage the protesters, some hurled insults, one man made obscene gestures, and a few stopped to photograph the group. One woman wearing a blue dress and cowgirl boots approached the protesters, taunting them with, “You better stand back – I’m not vaccinated.”

She went on to say, “I’m glad I’m an American; you lot need to go back to where you came from. You are retarded,” before turning to walk up the steps of the convention center.

Mary Cantley, a volunteer vaccinator with Mesa County, said she was at the protest because she’s tired of the obstructionism that Boebert and Jordan represent.

Approximately 35 Boebert and Jordan supporters arrived a short time after the Dems convened. Grand Junction police officers stood nearby, as a few people in both groups traded insults, at times drawing officers into the plaza to separate individuals.

At one point, Colin Wilhelm, a Glenwood Springs attorney who plans to run against Boebert in the next election, stood between the two opposing groups in an effort to stop the back-and-forth commotion, but he was unsuccessful.

“We’re all Americans,” Wilhelm told the crowd. “Instead of yelling at each other we need to talk to each other to solve problems.”

Tickets to the “Lincoln Day Dinner” event were $130. For an extra $100 you could attend a VIP reception, said Tom Keenan, an attendee and president of the group Stand For The Constitution. He said the event sold out at 500 tickets, and that there was a waiting list.

Gary Williams stood outside the convention center holding an American flag. He said he was there to support the Republican party, as well as Boebert and Jordan.

“I wish I could afford to attend the festivities but this is the best I can do,” said Williams.

Marty Dana and his wife Julie Benjamin-Dana traveled from Littleton to attend the dinner, and said they like what Boebert and Jordan stand for. When asked what that is, Marty clarified “conservative values is the easiest way to put it.”

An unidentified older woman decked out in red, white, and blue shoes and a white cowboy hat turned around as she approached the steps to say, “They all want to lose their freedom, I guess.”

To publicize the Saturday protest, Mesa County Democrats held a press event Wednesday at the city’s Lincoln Park, where people spoke out against Jordan and Boebert.

“On the Western Slope there are a number of issues like climate change and water rights and she (Boebert) has done nothing,” Grand Junction resident Beverly Hart said. “The bills she has put forth are performative and not relevant to the West Slope.”

Wednesday’s event was cut short due to the disruption by counter-protesters affiliated with Stand For The Constitution, a group that has spent months petitioning county and city officials to declare Mesa County free from having to comply with any state or federal public health mandates. At least one of the counter-protesters wore a gun at the event. Three Grand Junction City Police officers were called to Lincoln Park after an altercation between 73-year-old Ricki Howie and an unknown man whose age was estimated between 30-40.

“He was extremely rude and loud, yelling ‘liar’ (during one of the speeches) and wouldn’t back off,” Howie said. “I was standing next to him and told him he shouldn’t interrupt us. Then he pushed against me,” prompting Howie to push back with her hands.

It was unclear if the man, who ran off when police arrived, was affiliated with any group. Police declined to give the man’s name or say if he was in custody.

Howie said she planned to be at Saturday’s protest representing Moms Demand Action Against Gun Violence.

“We’re advocating a ban on ghost guns,” she said. “The kind you can buy in the mail with no ID. You don’t know who’s buying, selling, or making them. They’re very dangerous to the police because they are untraceable.”

When asked what brought her to the Lincoln Park event, counter-protester Tamara Ruckdeschel told a reporter,

“I was alive in the hippie days. I know a lot of original hippies. We’d like nothing more than a utopian earth world where children are safe and we don’t have to bear arms or work 40-60 hours a week and pay taxes. “Being a conservative and an adult and having history as a reliable record we are not afforded the luxury of believing that if we just lay down our guns that evil will do the same,” Ruckdeschel said. “Evil is here and we are drafted to battle evil. If we have to go to war with our country, the government, I would go to war with America. The Dems are misguided; all they want to do is sit on the couch, make out with their girlfriends and get high. Conservatives are about protecting innocence.”