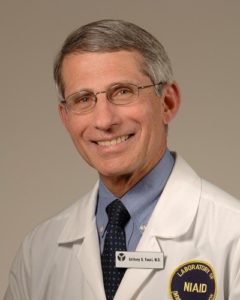 We interrupt our local political scuttlebutt to bring you this exchange today courtesy CNBC between GOP Sen. Rand Paul of Kentucky and White House COVID-19 medical advisor Dr. Anthony Fauci, in which Fauci finally unloads on Sen. Paul after many such confrontations in what should go down in history as legendary fashion:

Paul grilled Fauci about an NIH funded study that he says qualifies as gain-of-function research, the process of altering a pathogen to make it more transmissible in order to better predict emerging diseases. Fauci previously denied in previous Senate testimony that the NIH has directly funded the research at a lab in Wuhan, China that has come under intense scrutiny as a possible source of the virus.

Paul, R-Ky., asked Fauci if he would like to retract that statement from the May 11 testimony, “Fauci, as you are aware it is a crime to lie to Congress.”

Sen. Rand Paul, as readers should know, is an ophthalmologist, and on the strength of his degree in eye doctoring has become one of the leading quacks in the ill-informed second-guessing campaign against Dr. Fauci and other qualified epidemiologists who have tried desperately to reduce the death toll from COVID-19 in the United States over the past 16 months. If we were in the position of Dr. Fauci, with a lifetime of experience fighting the world’s deadliest diseases, we would have…much less patience for persons like Sen. Rand Paul than Dr. Fauci has been obligated to show in these hearings.

But not today, folks! With Rand Paul disparaging not just Dr. Fauci’s professional judgment but his personal integrity, the gloves finally came off:

Fauci, who oversees several NIH research programs as director of the National Institute for Allergy and Infectious Diseases, said he wouldn’t retract his previous statement. “I have not lied before Congress. I have never lied. Certainly not before Congress. Case closed,” Fauci said.

“You are implying that what we did resulted in the deaths of individuals,” Fauci responded as he pointed his finger at Paul. “I totally resent that, and if anyone is lying here, senator, it is you.”

It’s a relief to see Fauci has finally had enough of Rand Paul’s inane badgering after 620,000 Americans have died of COVID-19. A more aggressive response to misinformation early on in the COVID-19 pandemic, which to be fair was harder for Dr. Fauci under the previous administration, might have saved lives. Pivoting to the origin of the virus after spending the last year downplaying its severity just underscores Rand Paul’s bad faith.

Belated though it may be, more like this please.