Get More Smarter on Monday (July 19)

Today is the 200th day of 2021. Let’s Get More Smarter; if you think we missed something important, please include the link in the comments below (here’s a good example). If you are more of an audio learner, check out The Get More Smarter Podcast. And don’t forget to find us on Facebook and Twitter.

► With the Delta variant of COVID-19 continuing to surge and the same anti-vax lines being drawn around the country, there is a new push to restrict vaccine disinformation online. As The Washington Post explains:

In the latest salvo of the social media wars, a coalition of liberal individuals and groups has written to Facebook and Twitter urging them to ban 12 people who, one study found, spread the bulk of disinformation about coronavirus vaccines.

“People are quite literally dying because disinformation about the COVID-19 pandemic, the vaccine, and public health leaders is spreading,” they wrote to Facebook CEO Mark Zuckerberg and COO Sheryl Sandberg and Twitter CEO Jack Dorsey. The Daily 202 obtained an advance copy of the letter…

…Among the better-known signatories were UltraViolet, the Center for Countering Digital Hate, Alianza for Progress, GLAAD, Media Matters for America, NARAL Pro-Choice America, Planned Parenthood Federation of America, and the Women’s March.

Oh, and on the subject of vaccination levels differing by political affiliation, here’s another depressing chart that reiterates what we’ve been seeing for months:

Vaccination rate correlates with POTUS vote down to the county level. Hard to see this and assume politics and media diets have nothing to do with vaccine decisions.
Turning Fauci into a caricatured villain, wanting Biden to fail, Fox blaring conspiracy theories: all factors.
6/x pic.twitter.com/yKMPYCXERd

► As Megan Schrader opines for The Denver Post, Republicans such as Rep. Lauren “Q*Bert” Boebert are doing Coloradans a disservice by continuing to stoke anti-vaxxer paranoia.

On the subject of Boebert and inaccurate information, her crusade to validate “The Big Lie” in Arizona has been swiftly debunked.

This push comes as some Senate Democrats are considering whether to try to include immigration reform in the $3.5 trillion budget reconciliation package they’re currently drafting. The idea being floated would include funding for a pathway to legal status for certain groups, like DREAMers or immigrants with temporary protected status.

“I have always been a strong believer that we are a nation of laws and a nation of immigrants. That is why we must build an immigration system that is humane and orderly and rooted in justice and enforceability,” Gov. Jared Polis wrote. “To ensure that, I urge you to act now on comprehensive immigration reform including a pathway to earn citizenship through the reconciliation process.”

On Friday, a federal judge in Texas ruled that former President Barack Obama acted beyond his authority in setting up DACA, the program that protects eligible young undocumented immigrants from deportation, and ordered the government to stop approving new applications. The case is expected to be appealed, but the ruling adds new urgency to the question of whether the Senate will move forward with something.

Even before the ruling, Polis wasn’t the only one seeing an opportunity at this moment. The Colorado Immigrant Rights Coalition (or CIRC) also supports this push.

► Colorado Republicans are focusing their attention in 2021 on trying to elect partisan warriors to local municipal offices. Keep an eye on city council races in your area.

► We’re not going to tell you to avoid donating money to the re-election campaign of Rep. Lauren “Q*Bert” Boebert (R-ifle). What we ARE going to tell you is to be aware that your donation might just go right into her pocketbook.

Justin Wingerter of The Denver Post has a rundown of Q2 fundraising numbers for key races in Colorado.

► Senator John Hickenlooper (D-Denver) is standing behind President Biden’s nominee to head up the Bureau of Land Management: Tracy Stone-Manning.

► Congress this week may tackle the subject of regulating PFAS chemicals, which may be seeping into more water sources than previously thought.

► The Colorado Times Recorder looks at how Colorado Republicans continue to insist that their fractured party is totally fine.

► Sol Pais, the woman who bought a gun in Colorado in 2019 and briefly caused a lockdown of several school districts, should NOT have been allowed to purchase said weapon. As The Denver Post explains:

The U.S. Department of Justice is recommending a change in how background checks on gun purchases are conducted after an 18-year-old was allowed to illegally buy a shotgun in Colorado in a 2019 incident that closed hundreds of Front Range schools and led to a large manhunt.

The FBI should update its national background check system so gun dealers are able to verify age requirements for a buyer in that person’s home state and the state where the sale is being made, the Justice Department’s inspector general said in an audit report.

In April 2019, Sol Pais bought a one-way ticket to Denver from Miami and then traveled to a Littleton gun store, where she bought a pump-action shotgun and ammunition.

The FBI believed Pais might have been planning a school shooting tied to the 20th anniversary of the Columbine High School shooting because of an alleged fascination with the 1999 massacre, leading hundreds of schools along the Front Range to close as a precaution.

► Officials are rushing to try to get more young people vaccinated against COVID-19 before the new school year begins in mid-August.

► Former Vice President Mike Pence is testing the waters on a 2024 run for the GOP Presidential nomination and finding that his name is about as popular as “socialism” among Republicans.

► Paul Waldman of The Washington Post warns Congressional Democrats not to fall for the same old Republican trap of allowing policy details to get bogged down when the GOP has no intention of bargaining in good faith.

► As The Colorado Sun reports, Colorado businesses are optimistic about a quick economic recovery.

► Haiti announced a new governing plan weeks after its former President was assassinated.

► The Great Salt Lake in Utah is morphing into a dangerous toxic vat of crap.

In other words, this person could be besties with Rep. Lauren “Q*Bert” Boebert:

“Radical transgender homosexual lobby” talking about climate change bills now, ban on plastic bags. Complains about legal defense fund for “illegal aliens.” He says, “They’re treating them better than you, and you’re paying for it.”

You forgot to call them “vegans,” Dave.

► Reason #1,748 why Florida is gross and needs a governor not named Ron DeSantis.

► We say it a lot here, but it’s always worth repeating again and again: Elections matter. Local areas with Democratic Members of Congress in Colorado are getting a lot of federal money to assist with transportation and other community programs. If your Congressperson is a Republican…not so much. 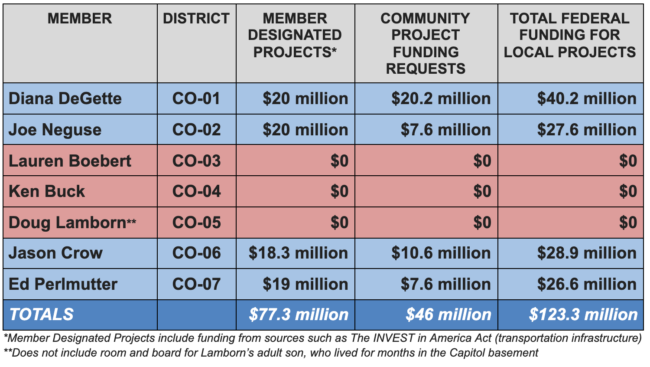