Save the Filibuster…So Republicans Can Kill it First! 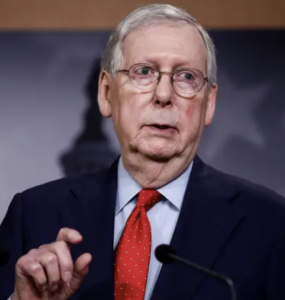 For anyone who still believes that good-faith bipartisanship remains possible in the U.S. Senate, Minority Leader Mitch McConnell would like to assure you otherwise.

Senate Minority Leader Mitch McConnell (R-Ky.) signaled Monday that Republicans, if they win back control of the upper chamber, wouldn’t advance a Supreme Court nominee if a vacancy occurred in 2024, the year of the next presidential election.

“I think it’s highly unlikely — in fact, no, I don’t think either party, if it were different from the president, would confirm a Supreme Court nominee in the middle of an election,” McConnell told radio host Hugh Hewitt.

McConnell was asked if a GOP-controlled Senate would take the same tack in 2024 that it did in 2016, when they refused to give Merrick Garland, former President Obama’s final Supreme Court pick, a hearing or a vote on his nomination to fill the vacancy created by the death of Supreme Court Justice Antonin Scalia…

…McConnell declined to say what Republicans would do if a justice stepped down in mid-2023 and Republican controlled the Senate.

“We’ll have to wait and see what happens,” McConnell said, asked by Hewitt if the nominee would get a fair shot.

This is the same Mitch McConnell who said earlier in May that he was “100 percent focused” on stopping the administration of President Joe Biden — regardless of the policies presented by the White House. McConnell is saying unequivocally now that he would prevent the advancement of a Supreme Court nominee by President Biden, just as he prevented the advancement of Merrick Garland in 2016 and rammed through the nomination of Amy Coney Barrett — the kind of nomination that was supposedly done “too close” to an election.

As Sahil Kapur of NBC News points out:

The way to understand Mitch McConnell’s actions on blocking Garland in ‘16, to reversing that standard for Barrett in ‘20, to suggesting he’d block Biden in ‘23/‘24:

He is betting that Democrats won’t do anything to retaliate when they have power. So far that bet is paying off.

It is ludicrous for Democratic Senators such as Joe Manchin of West Virginia and Kyrsten Sinema of Arizona to continue to protect “institutions” of the Senate — such as the filibuster — when there is absolutely no question that Senate Republicans don’t give a rat’s ass about tradition or fair play or hypocrisy or anything else. If Democrats don’t push for changes to the filibuster or the 60-vote rule in the Senate, it’s only matter of time before Republicans do it themselves.

Mitch McConnell would probably even tell you as much if you asked.