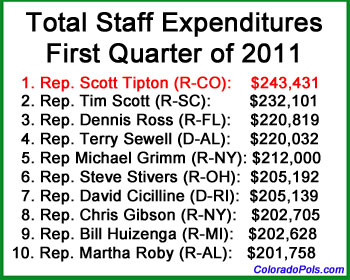 Republican Rep. Scott Tipton has had all kinds of problems during his first five months in office. Spending taxpayer money, apparently, has not been one of them.

According to a Colorado Pols analysis of House salary data available at the website Legistorm, Tipton spent more money on staff salaries in the first quarter of 2011 than any other freshman member of Congress…and it’s not even close. Tipton’s office doled out a whopping $243,431 in total salaries in the first three months of 2011, including $39,111 to make Mike Hesse one of the highest-paid Chiefs of Staff among the 93 first-year members in the House. Tipton is one of only 17 Freshmen to spend more than $200,000 on staff salaries in Q1. Colorado’s other Freshman Member of Congress, Rep. Cory Gardner, spent $186,673 on salaries during the same period.

Tipton’s office may try to explain these massive expenditures by pointing out that he serves a very large district (geographically-speaking). But Tipton’s predecessor in CD-3, Democratic Rep. John Salazar, spent just $153,013 on salaries in his first three months in office in 2005. 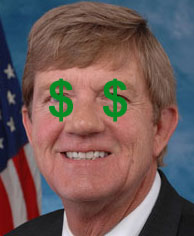 Tipton has gotten bad press lately for nitpicking at budget items, and he campaigned in 2010 as a fiscal reformer; he famously pledged to cut the federal budget in half, a laughable assertion but one that nonetheless he tried to fit into his “smaller government” image. Just last weekend Tipton talked about cutting government spending in remarks to the Pitkin County Republicans. As the Aspen Daily News reports:

“But the question we all have to answer now is, ‘Can we continue to pay the price?’ The answer is ‘no’ and we know it. We are in a dive bomb to economic catastrophe if we do not turn the ship.”

How Tipton will continue to perpetuate his “smaller government” image despite his big spending ways will be vital to his re-election chances in 2012. We’re guessing that “Spendy” Scott Tipton isn’t the kind of moniker he’ll be looking for.