UPDATE MAY 17: Some confusion on Monday as Rep. Lauren Boebert appears to have ditched Saturday’s event without letting anyone know:

.@laurenboebert was supposed to speak at this event this afternoon but she’s nowhere to be found. Organizer won’t answer questions about if she’s still speaking and just pulled a candidate from a different congressional district on stage to fill the time. 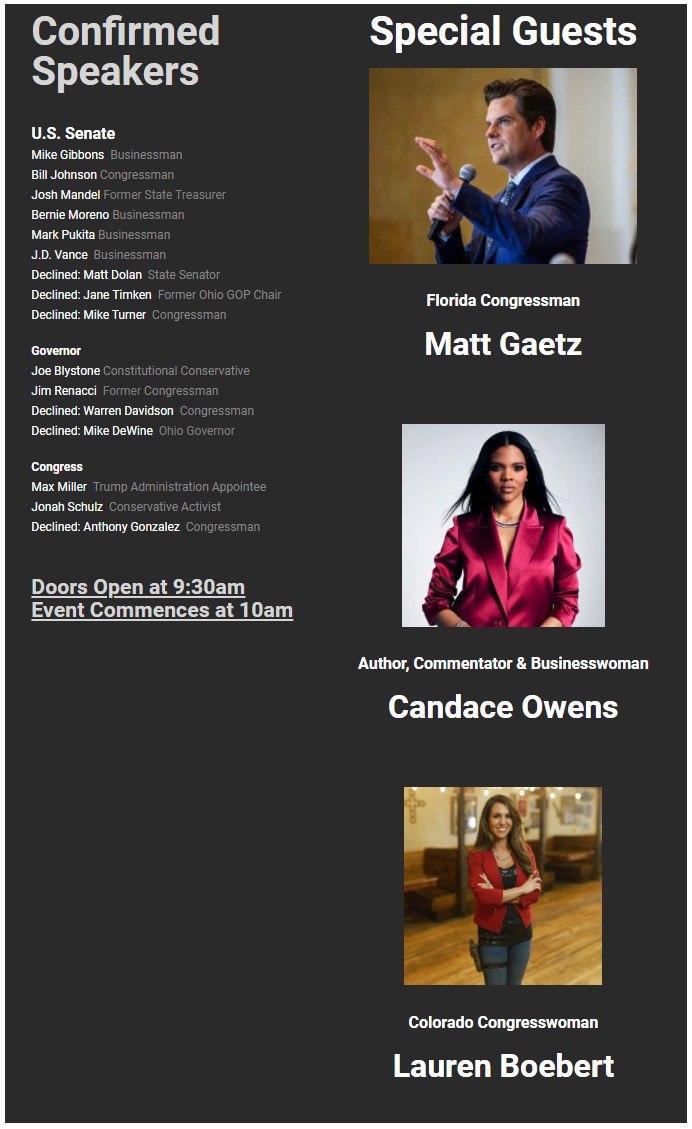 From a press release announcing next weekend’s Ohio Political Summit, we learn that Colorado’s most notorious freshman Rep. Lauren Boebert is the star of what’s being billed as the Buckeye State’s first major 2022 cycle event to “discuss, share in forum setting, and promote candidates who will work for good government and America First policies.”

Strongville, Ohio (we’ll admit this is a cool name for a town) is very far from Colorado’s Third Congressional District, so safe to say there will be no town halls for Rep. Boebert’s hapless constituents that weekend.

Co-starring with Boebert is a conservative activist whose name we keep thinking we’ve heard for the last time, only to pop up again: Candace Owens, formerly of the “teen fash” right-wing organizing group Turning Point USA:

On May 15, 2021 the Ohio Political Summit will feature Republican Leaders considering a run in 2022 for U.S. Senate, House 16 and Governor (all viable candidates have been invited to the event headlined by Conservative Commentator Candace Owens and Conservative Congresswoman Lauren Boebert).

“I am very excited to escape Fort Pelosi, and come to the Ohio Political Summit,” said Representative Lauren Boebert (R) Colorado. “As a strong voice for freedom, I look forward to sharing thoughts about taking back our country with like minded conservatives; I encourage everyone to participate.”

“We are very pleased to be hosting this watermark event, as of today virtually every viable candidate is participating,” said Shannon Burns, Strongsville GOP President and CEO of WAB Strategic. “Ohio is a bellwether state, and we have an incredible group of candidates. We are very excited to have Candace Owens and Lauren Boebert headline the start of a great season.”

It’s a fair and debatable question which of these two individuals is more discrediting to the other. Although locals have been saturated with Boebert’s non-stop firehose of ludicrous falsehoods and calculatedly offensive pronouncements on every available subject for months now, Candace Owens has been playing the outrageousness for cash and prizes game much longer than Boebert has. From disastrously trying to loop the clueless Kanye West into her bogus “Blexit” movement to suggesting that if “Hitler just wanted to make Germany great” he would have been “fine,” which resulted in the University of Colorado chapter of her own organization calling for her resignation, we were honestly surprised to see Owens headlining any event–much less co-starring with someone with a reputation to defend like a member of Congress.

Looks like it’s time to revise those standards down again.