Who Will Speak for the Racists? Republicans Will! 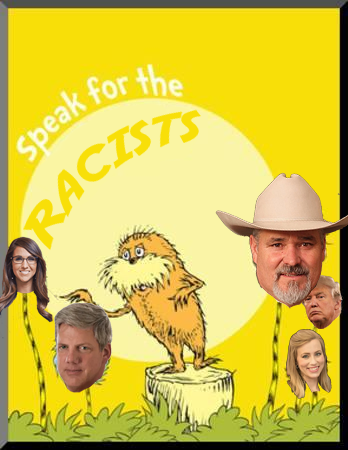 Forget the trees…who will speak for the racists?

One of the ongoing themes of the 2021 legislative session and the post-2020 Republican Party has been the complete disarray among the GOP — even moreso than normal — which has included a complete abdication of any sort of attempt toward establishing or maintaining basic political and social responsibilities.

As Alex Burness and Saja Hindi of The Denver Post report today in a cringeworthy story, Colorado Republicans keep moving forward with the idea that racism and hate speech is just another point of view.

A familiar feeling of hurt and exhaustion sank in for Black lawmakers last week when state GOP Rep. Ron Hanks made a joke about lynching on the Colorado House floor before launching into a defense of the three-fifths compromise of 1787, which counted Black slaves in the U.S. as less than whole people.

Hanks, who is from rural Penrose, was mistaken for GOP Rep. Mike Lynch last Thursday during debate over a civics education bill.

“Being called Mr. Lynch might be a good thing for what I’m about to say. No, just kidding,” Hanks said, then described the three-fifths compromise as “not impugning anybody’s humanity” but rather being a product of political negotiation. After being hissed at by Democrats, Hanks said he was surprised anyone could see his comments as controversial.

We covered Hanks’ most recent disgusting comments in this space — you can watch the video yourself. As Burness and Hindi report for the Post, the nine members of the legislature’s Black Democratic Legislative Caucus are justifiably sick of this crap.

Republicans in the legislature acting openly racist (or just blowing dog whistles really loud) is nothing new, sadly. But what has been different in 2021 is the degree to which GOP leaders have just stopped pretending that they can or should do better. 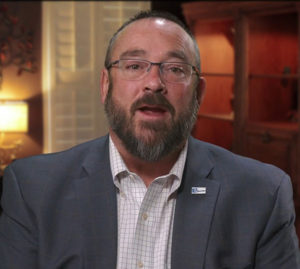 House Minority Leader Hugh McKean has repeatedly proven that he has no real idea what he is doing with his leadership role. It’s not clear that the right-wing loonies in the GOP caucus would pay attention to McKean even if he did have a clue, but that doesn’t excuse the fact that McKean isn’t even trying to do the right thing. Check out what he told the Post in response to questions about this story:

The Loveland Republican told The Post he welcomes and encourages all perspectives. The lectern of the House, he said in a statement, “is the exact place where we can have uncomfortable discussions, about policy, about views and about the path forward in Colorado.” [Pols emphasis]

Seriously? Racism, sexism, homophobia…McKean “welcomes and encourages all perspectives.” This really isn’t all that different than former President Trump saying that there are “fine people on both sides” in the wake of a violent conflict in Charlottesville, VA initiated by white supremacist groups.

McKean’s statement that he “welcomes and encourages all perspectives” is a common excuse employed by Colorado Republicans. Danny Moore was recently ousted as the Chair of the Colorado Congressional Redistricting Commission because he is an election fraud truther…but he dismissed criticism by claiming that he is just “trying to start a conversation.” When pushed further, Moore claimed (with absolutely no evidence) that he was being targeted because he is a “black conservative.” Responsibility? Nope. Victimhood! You bet!

McKean is bowing to the snowflake sensitivities of his more openly-racist colleagues by not clearly establishing his opposition — and that of his caucus in general — to hate speech. This allows folks like State Rep. Richard Holtorf to shrug off their own statements with an all-too-familiar excuse:

“I in college had a friend who was an African American and he was a homosexual, and we were good buddies,” Holtorf added.

Oh, well, then by all means…

And then there’s this dodge from Rep. Hanks:

“State Rep. Ron Hanks declined to be interviewed about his lynching joke and remarks about the three-fifths compromise, adding, “I’ll respond in my own articles and just let them (Black lawmakers) have their fun.” [Pols emphasis]

The simple truth here is that Republicans are doing more than tolerating hate speech — they’re basically embracing it. As this lede from a March story in POLITICO illustrates:

The House GOP’s No. 3 leader recently urged Republicans to make clear they’re not the party of white supremacy. Two days later, one of their members spoke at a conference organized by a known white nationalist.

That’s not just our “opinion,” either.