We Have Had More Mass Shootings Than Days of the Year

On Thursday evening, eight people were killed in a mass shooting at a FedEx distribution facility in Indianapolis. Take a look at this graphic from CNN, which shows the location of 45 mass shootings (in which 4 or more people are wounded or killed) that have taken place since March 16th: 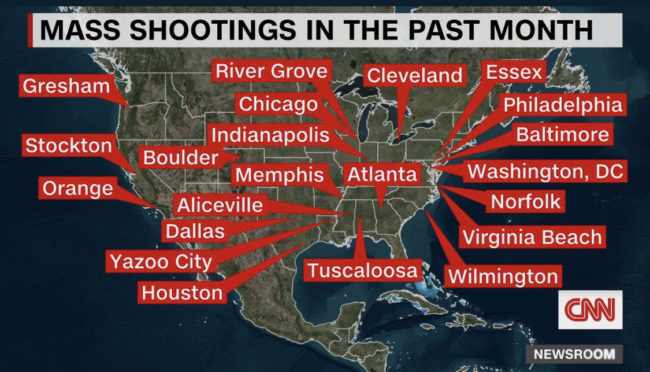 That’s 45 mass shootings in the past month ALONE. The United States has suffered through 147 mass shootings thus far in 2021. We haven’t had that many DAYS in 2021. 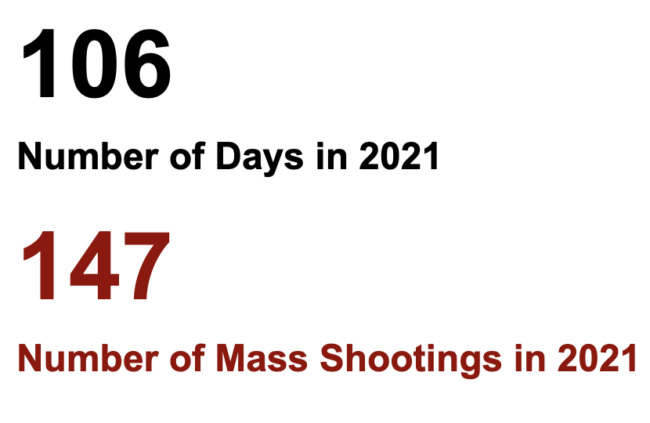 That’s right — we are AVERAGING more than one mass shooting per day in 2021. Forget, for a moment, about your opinion on the second amendment. Nobody could look at the graphics above and just shrug. This is weird.

Now, here’s the other strange thing about America’s mass shooting epidemic: Americans by and large WANT to see more gun safety measures approved by lawmakers. Check out these findings from a Quinnipiac University poll that was released on Thursday, April 15:

When you break down the numbers into specific policy proposals, the data remains clear:

♦ 89% of Americans support requiring background checks for all gun buyers;

♦ 52% of Americans support a nationwide ban on assault weapons;

♦ 51% of Americans support a ban on high-capacity ammunition magazines;

♦ 45% of Americans believe that gun violence in this country is a “crisis.”

The reason that Congress hasn’t taken action to address gun violence in this country is NOT because Americans don’t approve of these policy changes.

As we’ve noted before in this space, the only way to make real change on the issue of gun violence is to elect more people who are willing to make those changes.