Another “Honey Badger” to Worry About 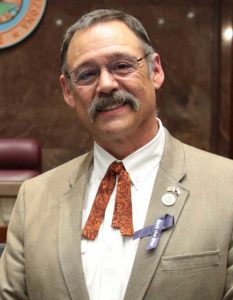 He wants to run for Secretary of State (SOS), and he calls himself “Honey Badger.”

You can exhale a little bit. We’re not talking about former Colorado SOS and failed candidate for Republican State Party Chair Scott Gessler, though the similarities are striking. We’re instead discussing Arizona Republican Rep. Mark Finchem, the Colonel Sanders cosplay model who is running for Secretary of State in Arizona after spending the last six months ranting and raving about nonexistent election fraud.

Finchem has launched a campaign to be Arizona’s next secretary of state, a powerful position that oversees the election system of one of the nation’s most important swing states. And he’s running on a “secure elections” platform rooted in conspiracy-mongering.

“Since my very first election, I knew something was very wrong with our elections process,” Finchem claims on his website. “Then on November 3rd, 2020, the unthinkable happened: Americans witnessed real-time reallocation of votes from one candidate to another, broadcast on national television.”

Some Republicans worry that Finchem could be a force to contend with in primary, given how virulently pro-Trump much of the GOP base is in the state. And Democrats are terrified at the prospect of Finchem in charge of Arizona’s election system heading into 2024—when the state could once again be at the epicenter of the presidential map.

Finchem is a Trump loyalist and a frequent guest on former Trump adviser Steve Bannon’s web show “The War Room.” His online handle on right-wing platforms Telegram and Gab is “@AZHoneyBadger,” which he uses to sing the merits of another well-known Colorado Republican:

Yup, Finchem is all-in on the QAnon theory that prominent Democrats are satan-worshipping, baby-eating sex traffickers. He was also in attendance at the Jan. 6 insurrection at the U.S. Capitol, though he claims to have remained “on the outskirts” of the building.

Unfortunately, Finchem does have a path to becoming Arizona’s next SOS. The current SOS is Democrat Katie Hobbs, who is expected to run for Governor in 2022. Thus, whoever wins the 2022 Republican Primary will face a different Democrat in a race for an open seat. Republicans worry that Finchem is too crazy to win a General Election — “If he wins the primary, we’re done,” one GOP consultant told Vice News –but strange things can happen in down-ballot races.