What Boebert’s “Spirit Realm” Talk Is Really About 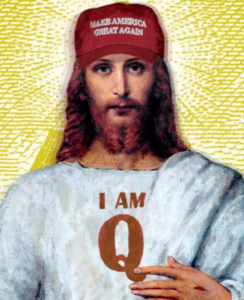 This is a clip from an interview of Rep. Lauren “Q*Bert” Boebert on televangelist Kenneth Copeland’s Victory Channel with Pastor Gene Bailey, in which Boebert goes on a revealing tangent:

BAILEY: What do you want to tell the American Christians our there that are watching, what do they need to do?

BOEBERT: Well I would want to encourage everybody to say, “Don’t be distracted by what you are seeing in the natural.” There is certainly things that are going on in the unseen, that God is doing. God is working. He is always moving, and so just not to give up hope. Hebrews 11:1 tells us that faith is the acceptance of things hoped for, the evidence of things not seen.

So don’t get distracted by everything that you see on the outside. I believe that we are taking ground in the spirit realm. [Pols emphasis] And we will see that come to light. It has to take place there before we actually see it here in the natural…

If you’re not familiar with the well-documented intersection between evangelical Christianity and the “QAnon” conspiracy theory that Lauren Boebert professed to be “very familiar” with and she “hope[s] that this is real,” it may not be readily apparent that Boebert is describing a major component of the QAnon adherent worldview. A National Public Radio interview with Katelyn Beaty of Religion News Service last August explored this connection:

SHAPIRO: Your piece is called “QAnon: The Alternative Religion That’s Coming To Your Church.” Do the people you interviewed really see it as a belief system comparable to organized religion?

BEATY: They do. They are picking up on the overt spiritual language that Q, whoever that is, is using in his messages on the Internet, and they see that as connecting directly to the Bible, to the God of Christianity and to God’s hand at work in the world. So they see the QAnon messages as revealing truth in the world and that they are supposed to take up a spiritual battle to reveal truth.

For adherents of the QAnon conspiracy theory, Boebert’s religious talk isn’t code–it’s the language they also use in describing their movement. Just as QAnon believers appropriated the very real child sex trafficking issue to promote their belief in a global pedophile oligarchy of movie stars and politicians, they’ve also co-opted the rubric of Christianity. And make no mistake, plenty of religious leaders are upset about what’s happened:

[PASTOR] JEB BARR: As a Christian, as a church, we’re going to be spreading the message of the Gospel of Jesus Christ because that’s the most important message in the world. So if the people spreading that message are also spreading easily debunked, crazy lies, why would the message be believed, right? Why would we listen to my friend Joe, who says he’s a Christian and who’s telling me about Jesus, if he also thinks that Communists are taking over America and operating a pedophile ring out of some pizza restaurant? [Pols emphasis]

For Lauren Boebert, this conspiracy theory cloaked in religiosity is nothing more than a return to her roots–the extreme politics she eagerly embraced in the Republican primary before being forced to temporarily distance herself from under general election scrutiny. Not least in defense of people of faith who reject unhinged conspiracy theories labeled by the FBI is a terror threat, which we continue to believe is most people of faith, it’s important to understand the difference.

What Boebert is talking about is not that old-time religion.