Happy Cory Gardner and Sad Cory Gardner. You can plot out Colorado’s shift from a swing state in 2014 to a solid blue state in 2020 with these two images: 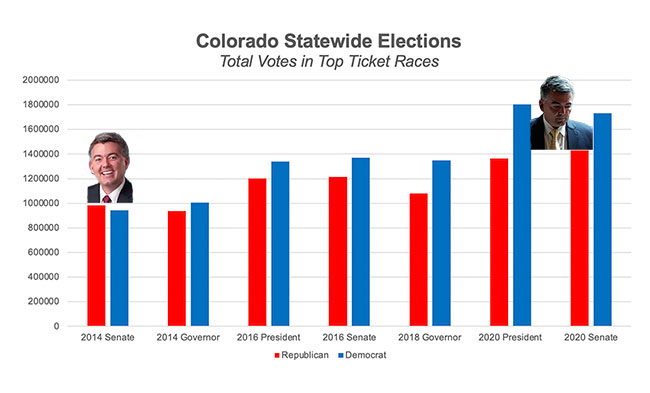 Colorado was swept up in a massive blue wave in 2018, handing Democrats all four of the top statewide offices (Governor, Attorney General, State Treasurer, and Secretary of State), as well as control of both chambers of the state legislature. Democrat Jared Polis cruised to an 11-point victory over Republican Walker Stapleton in the race for Governor. On a federal level, Democrat Jason Crow’s victory in CO-06 gave Democrats the keys to four of Colorado’s seven congressional districts.

In 2020, Democrats solidified their advantage in Colorado, with Democrat John Hickenlooper snatching Gardner’s Senate seat by a nearly 10-point margin. Democrats even managed to add a seat in the State Senate while maintaining a solid majority in the State House.

In the race for President, Democrat Joe Biden easily defeated President Trump by a margin of nearly 14 points, which was a massive increase from Democrat Hillary Clinton’s 5-point victory in 2016. Consider this: Colorado was a swing state for President in 2008 and (sorta) in 2012. In 2020, neither major party candidate for President even bothered visiting our state in the six months before Election Day.

Colorado Republicans have fallen hard since Gardner defeated incumbent Democratic Sen. Mark Udall in 2014 by a narrow 47-45 margin. The numbers are staggering: Hickenlooper added 786,911 votes to Udall’s 2014 total, while Gardner’s vote total only went up by 445,601. Democrats now have such an advantage in Colorado that Hickenlooper would have still beaten Gardner if we didn’t count any of the votes from Denver, which is the most heavily-populated area in the state and always a reliably-blue county.

Republicans aren’t just losing in Colorado — they’re not even competitive anymore. In fact, Republicans are so buried in our state that it’s difficult to even come up with plausible names for top ticket races in 2022.

The 2020 election proved that the 2018 Democratic wave in Colorado was no fluke. We are a blue state now, and there’s no way to argue otherwise.