On 10/29, officers responded to activity at a ballot box where someone appeared to place an on fire paper in the box. El Paso County Clerk & Records office verified no ballots were damaged. 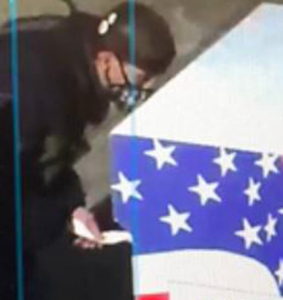 Police in Colorado Springs need help finding a man, who tried to insert a flaming piece of paper into a ballot box outside of Centennial Hall on South Cascade Avenue.

Colorado Springs Police said it happened on October 28th. Investigators were called the morning after the incident to review surveillance video…

“Good news is there is no damage to any of the ballots.”

The El Paso County Clerk and Recorder’s Office also confirmed to KRDO that none of the ballots were damaged. They said the ballot box itself is designed to withstand these types of incidents, as air-tight containers with low oxygen levels.

Our office is vigilant in securing the integrity of our elections. The mail ballot system is proven to be the Gold Standard nationally and safeguarding the ballot boxes is tantamount to ensuring voters have confidence their voice will be heard. We have zero tolerance for any person who attempts to disenfranchise voters participating in the election and violate the trust they have placed in our election system. You can be assured perpetrators who seek to disrupt the election process by tampering with ballot boxes will be prosecuted.

They’ll have to catch the would-be ballot arsonist to be sure about his motive, but this looks on the surface to be another half-baked attempt to “prove” how mail ballots can be monkeyed with for the purpose of undermining confidence in mail ballot elections. Back in 2013, local conservative prankster Jon Caldara almost got prosecuted for for trying to vote in a Colorado Springs district he didn’t reside in to demonstrate a supposed flaw in the state’s same-day voter registration system. In such cases, when caught the defense is always that they’re engaging in “white hat hacking” of the system to show how it could be subverted by real bad actors.

Congratulations to this latest dumbass for “proving” that ballot drop boxes are fireproof.