FEC United, a conservative group working closely with the Colorado Republican Party, is fundraising to sue journalists for “unequal treatment.”

Texts and emails from the group redirect to a webpage URL titled “Lawsuit” that claims the legal action will be the inaugural project of its “Law & Policy Center,” which FEC is launching with Colorado Republican Party Vice Chair Kristi Burton Brown.

The request for money doesn’t specify the grounds or the defendants for the lawsuits, though in addition to “unequal treatment” it mentions “those who attempt to falsify information with the intent to spread fear and hate.” It’s unclear if Brown, who has provided the conceptual framework for FEC’s Law & Policy Center, will be filing this lawsuit herself.

This isn’t the first time FEC United has threatened journalists, either with legal action or with doxxing.

At an Oct. 15 meeting founder Joe Oltmann said he will “put them on billboards.” He went on to boast that if any “didn’t think he has the money to do it, they will run out of money before he does.” Oltmann has stated publicly that he’s going to sue the Colorado Times Recorder. 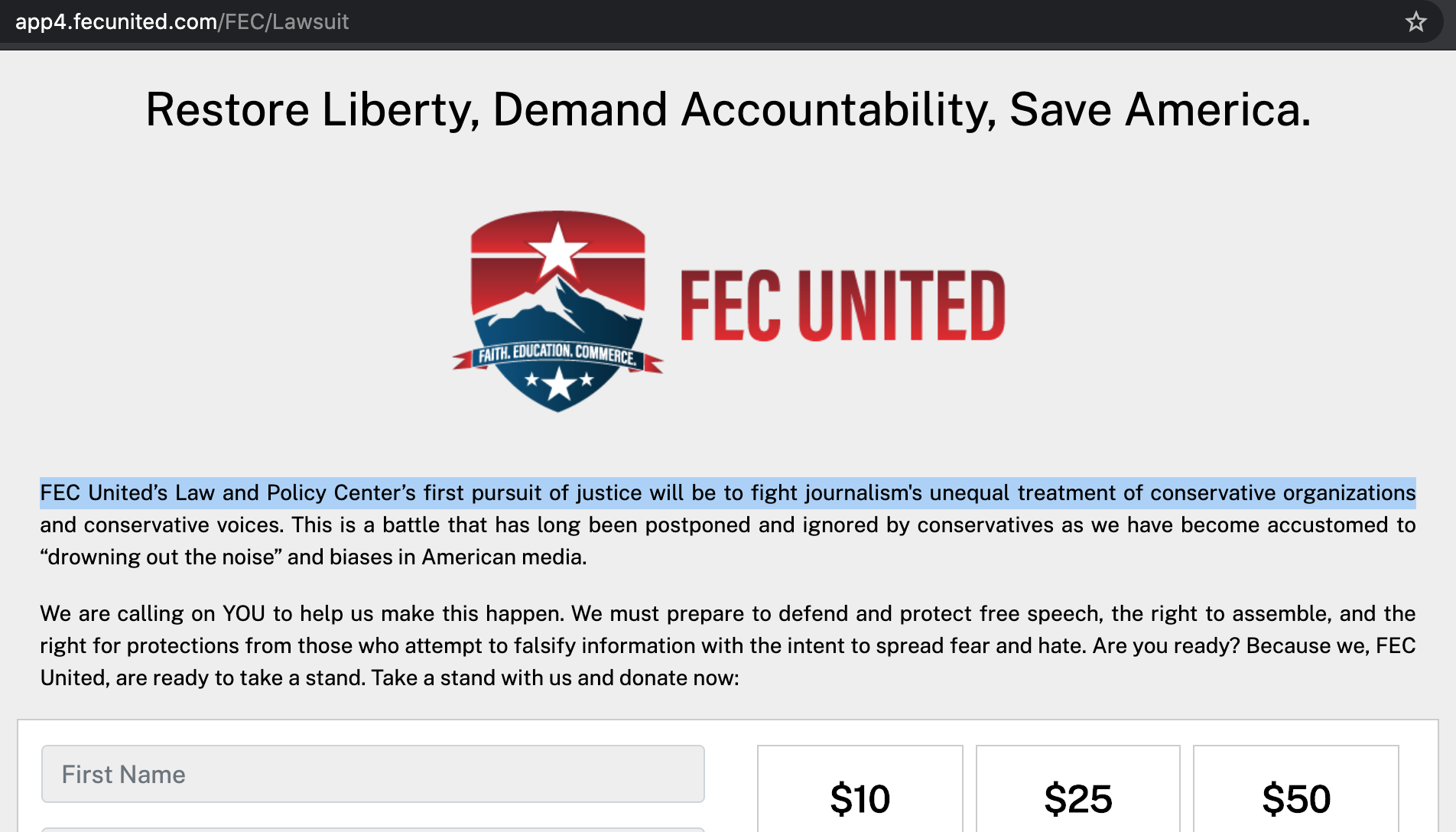 The FEC United email asks recipients to “take a stand” by donating money.

“FEC United’s Law and Policy Center’s first pursuit of justice will be to fight journalism’s unequal treatment of conservative organizations and conservative voices,” states the email. “This is a battle that has long been postponed and ignored by conservatives as we have become accustomed to ‘drowning out the noise’ and biases in American media.

“We are calling on YOU to help us make this happen. We must prepare to defend and protect free speech, the right to assemble, and the right for protections from those who attempt to falsify information with the intent to spread fear and hate. Are you ready? Because we, FEC United, are ready to take a stand. Take a stand with us and donate now.”

In it, Brown laid out her vision for a multi-million dollar membership-funded action-oriented think tank. She says that it won’t just publish policy papers or file lawsuits, but conduct soup-to-nuts grassroots organizing and culture-building, from engaging parents and business owners in activism to actually building its own schools. She says they expect to fully launch the membership program in January.

The high-volume, small-dollar donation model is the same model used by political parties, such as the Colorado Republicans, to raise money, since state law places severe restrictions on the amount any one individual can donate to a party.

“We uncovered 13 ‘journalists’ who are actually activist reporters working with Antifa,” Oltmann told Colorado Politics. “I have pictures, videos and enough information to bury them heftily and for some create a massive problem for the news organizations that employ them. Lawsuits to follow. It’s going to be a season of lawsuits … get ready for it.”

Oltmann has also publicly promised a “season of recalls,” without specifying which election results he hopes to overturn. Last year Vice Chair Brown divided her own Republican party by filing a failed recall attempt of state Rep. Tom Sullivan (D-Centennial).

The Colorado Republican Party did not return a call asking whether it supports Brown’s fundraising endeavors with FEC United or the group’s lawsuit against journalists. This article will be updated with any response received.

However, the GOP spokesman told Colorado Politics that the Colorado Republican Party isn’t working formally with FEC United. That said, the group is actively organizing campaign efforts and fundraising for Republican candidates, several of which have signed the group’s “Candidate Pledge.” The group is also sending email solicitations for volunteers to be poll watchers for the Trump campaign.

Watch some highlights from Brown’s presentation in the video below, which also includes an explanation by Oltmann of FEC United’s transition from a for-profit company to a trio of linked nonprofits.