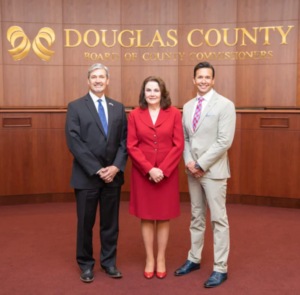 Douglas County Board of COVIDiots.

As Westword’s Connor McCormick-Cavanagh reports–the widely ridiculed announcement by the Republican Douglas County Board of Commissioners last summer that they are pulling out of the Tri-County Health Department and setting up their own in the middle of the COVID-19 pandemic, one that presumably wouldn’t force red-blooded Americans to submit to the tyranny of wearing masks and social distancing, is ending with a whimper:

Douglas County has struck a tentative agreement with the Tri-County Health Department to remain with the agency through at least the end of 2022.

“Our Board is persuaded by Tri-County Health Department’s policy proposal that would increase the role of individual counties regarding public health orders, as they are being developed and before they are issued,” the Douglas County Board of Commissioners just announced.

Details of the agreement are sparse, and it would still need to be approved by the Tri-County Health Department’s Board of Health. If the board okays the deal, the parties will have staved off a breakup of the decades-long partnership between Douglas, Arapahoe and Adams counties. Douglas County commissioners had said they were seeking a split in July, after the health department issued a mask mandate.

Although Douglas County Commissioners are characterizing this agreement as a “win-win,” citing unspecified concessions to allow input from county governments on public health orders, the reality is very different. Republican DougCo commissioners may be beholden to the “COVIDiot” political resistance against measures taken to slow the spread of the COVID-19 pandemic, but every poll of public opinion indicates clearly that is not how a majority of DougCo residents feel. The announced withdrawal of Douglas County from the Tri-County Health Department in retaliation for the passage of a mask mandate has never looked more idiotic than it does today, with a third wave of pandemic infections bearing down on the state and nation.

Actually, scratch that. It will look worse tomorrow, and the next day, and every day more Coloradans get infected and die of COVID-19. Politically, the extreme tone-deafness of DougCo commissioners on this issue could upend Republican control, with two of three seats up for election this year. Incumbent Lora Thomas has been on the defensive ever since this ill-conceived stunt was announced, and Republican commish candidate George Teal has made no secret of his desire for “local control” of the health department. In both of these races, the Democratic candidates have hammered the Tri-County Health pullout decision as a colossal mistake.

Now DougCo’s voters will have the final say, and we’ll see if they have been paying attention.