Yesterday, Sen. Cory Gardner once again complained about the decision by former Gov. John Hickenlooper to skip the Club 20 annual conference debates, which as we’ve discussed at length in this space have faded from prominence in recent years due to stilted politics and equally antiquated execution in the digital campaign era: 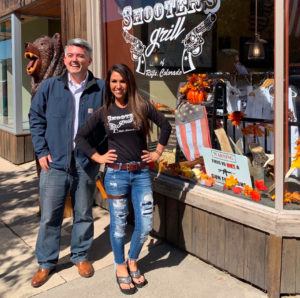 It’s nothing new, of course–ever since Hickenlooper announced he would skip Club 20 following now-Gov. Jared Polis‘ precedent for skipping it, Republicans have done all they could to exact a toll politically. But after Polis’ spurning of Club 20 didn’t affect his blowout win over Walker Stapleton in 2018, this election year Hickenlooper was joined by plenty of other Democrats who decided kissing this particular ring wasn’t worth the trouble.

And then yesterday evening, as the Colorado Springs Gazette’s Joey Bunch reports, a funny thing happened:

Club 20 said it had already adjusted the format to feature Boebert in the absence of the Democrat, when the Republican nominee asked to send a prerecorded video answering submitted questions.

Without a Democratic opponent to debate, this could have been a golden opportunity for Lauren Boebert to demonstrate something in the way of qualifications for the job of serving in Congress. A reason we’ve heard for Boebert perhaps not wanting to attend Club 20, with or without an opponent, is the presence there of old-school Western Slope Republicans who are not happy that five-term incumbent Scott Tipton has been ousted by a fringe candidate who has directly placed this seat in jeopardy. Another is that under even slightly adversarial questioning, it’s our understanding that Boebert folds up like an accordion–which would explain a strong desire for scripted answers to scripted questions.

Either way, we do believe the “question” of Club 20’s relevance, which has consisted entirely for the last few years of Republicans carping that nobody pays attention to Club 20 anymore, has been settled. By a Republican that fellow Republicans can’t say a thing negative about, at least in public, until November 4.