Lauren Boebert And Tom Hanks And “QAnon,” Oh My! 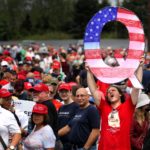 And we’ll be fair: it came as news to us from Boebert that Tom Hanks is apparently now a citizen of the Hellenic Republic, a.k.a. Greece! There’s a whole backstory about this development in the life of one of America’s favorite actors you can Google if you’re interested.

You knew where this was headed, didn’t you? And you were right:

QAnon supporters have also alleged that other celebrities are tied to child sex trafficking, such as Oprah Winfrey, Ellen DeGeneres and the Clintons. USA TODAY has rated those accusations as false as well.

When Hanks first was in quarantine back in March after contracting the novel coronavirus, some posts alleged he was arrested for pedophilia. Those were also reported as false.

Tom Hanks’ dual Greek citizenship reportedly came about after years of travel to the country where he owns an island home, and was offered by the government of that country after Hanks helped in the recovery effort after a major 2018 wildfire. Anybody who knows how dual citizenship works (we have no reason to assume this includes Lauren Boebert) knows that Hanks didn’t lose his American citizenship, and is entitled to fundraise for Joe Biden any time he pleases.

And now we have to ask, yet again, why Lauren Boebert is so exercised about a subject that just happens be part of the QAnon conspiracy theory she’s been associated with since before she won the CD-3 Republican primary? For someone who wants general election voters to believe she “doesn’t follow QAnon,” Boebert is not doing a good job convincing anyone.

Like fellow “Q-bert For Congress” Marjorie Taylor Greene, maybe just own it and be proud.