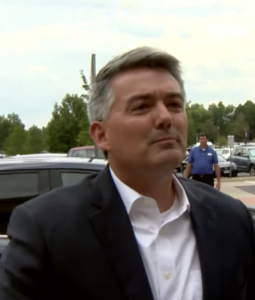 U.S. Senator Michael Bennet on Monday called for an investigation into the federal government’s response to the spread of the novel coronavirus in meatpacking plants across the country.

In a Monday letter to the inspector generals at the U.S. Department of Agriculture and the Department of Labor, Bennet asks the agencies to investigate whether the outbreaks — like one at the JBS USA Greeley beef plant where nearly 300 people were sickened and six died — were made worse by federal actions…

Nationwide, at least 16,200 workers in meat and poultry processing plants in 23 states contracted the novel coronavirus by the end of May, and 86 died, according to a July report from the Centers for Disease Control and Prevention. In Colorado, at least seven meat processing plants have reported outbreaks infecting about 450 workers. The outbreak at the JBS Greeley beef plant is one of the largest in the state.

The COVID-19 outbreak at the JBS beef packing plant in Greeley that killed 6 and sickened hundreds of workers in April was a major failed test of the Trump administration’s pandemic crisis management, as it became obvious that the virus would not simply “go away” as President Donald Trump had predicted. While plant workers in unsafe conditions feared becoming infected, Trump was worried that the supply of meat could be interrupted. Trump eventually invoked the Defense Production Act to declare meat plants essential infrastructure that could not close–but before that, Sen. Cory Gardner and Vice President Mike Pence made promises to rigorously test JBS plant workers in Greeley and keep the meat flowing.

In a blistering press release yesterday, the United Food and Commercial Workers (UFCW) Local 7 asks the question they’ve been asking since April: “Cory, where are the tests?”

Since April, Colorado Senator Cory Gardner has continued to brag to the media that he secured 5,000 COVID-19 tests for meat-processing plant workers at JBS Greeley in Greeley, Colorado. The problem? The tests were never made available to workers. The JBS Greeley plant became one of the first outbreak sites in Colorado and continues to lead the nation in meatprocessing plant worker deaths. Now, JBS USA has notified the Union it will increase JBS workers health care premiums by more than 30 percent—as much as $800 more a year per family member.

UFCW Local 7 is calling on Sen. Cory Gardner to explain where the 5,000 tests have gone after specifically claiming he leveraged his relationship with Vice President Mike Pence to acquire them in order to keep the plant running.

At this point it’s more a question of accountability, since eventually the Colorado Department of Public Health and Environment stepped in to test JBS workers. With that said, with COVID-19 testing (not to mention timely results) still in short supply, we suspect the promise Gardner made to JBS workers for 5,000 tests would nonetheless be gladly accepted, and useful since testing negative once doesn’t mean anyone is safe.

The unfortunate reality is that among a veritable ocean of broken promises from Trump and Republicans during the nation’s historic failure to effectively confront the COVID-19 emergency, a few dead meatpacking workers in Greeley are easy to forget about. Far more Americans, either consciously or not, cared about the free flow of meat at market prices than the frequently immigrant and otherwise disadvantaged populations who find work in American meatpacking plants.

But the fact remains: these workers got screwed, and Cory Gardner played a central role in screwing them. The promises made to Greeley JBS meatpacking workers weren’t about helping those workers at all, but rather assuring the American consumer. And as soon as Trump declared the meatpacking industry “essential infrastructure,” forcing the plants to stay open, Cory Gardner stopped caring about the workers.

And that should trouble meat-eaters’ conscience at least as much as an extra portion.