We noted yesterday that Gov.-elect John Hickenlooper has selected former GOP Gov. Bill Owens as a statewide co-chair of his transition team. This is being widely viewed as an excellent choice, and we think the moderate Owens will do as much as possible to broker the kind of bipartisan cooperation that Hickenlooper wants to lead off his term with.

We’re a little less enthusiastic about another choice that Hickenlooper made–in addition to appointing Owens as a statewide co-chair, apparently his transition team saw fit to appoint former GOP Senate candidate Bob Schaffer as a committee co-chair dealing with education issues. Superficially, this would seem to make sense, since Schaffer does serve on the state Board of Education. But we can’t help but note that if the unthinkable had happened, and Tom Tancredo had somehow won the election, Schaffer’s role wouldn’t have changed much: 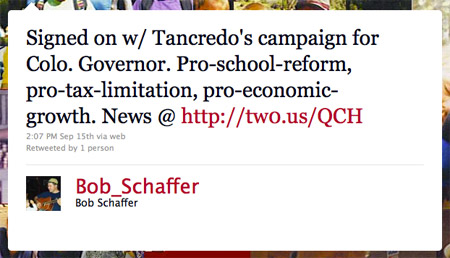 Which linked to this statement:

“Tom has always been a tireless leader on issues of education reform, tax limitation and economic growth,” said Schaffer. “I’m proud to support Tom Tancredo, and I urge all educators, tax reformers and business leaders across the state to do the same.”

Look folks, we’re not naive. We get that it’s natural to include the chairman of the Board of Education in the gubernatorial transition process, and that politicians who oppose one another in a campaign have to come back and work together afterward. But Tancredo was no ordinary candidate, and Schaffer is an open proponent of education policies that most Coloradans would thank goodness he doesn’t have the power to implement if they knew. Remember, this is a guy who’s past debating old hat issues like vouchers for religious schools, and prefers livelier topics like whether a paddling on the backside or a ruler to the knuckles works better on the kiddies.

Despite this, Hickenlooper has an opportunity for leadership here more than a problem, depending on how he handles it. At the very least, we know some nervous teachers who will want some reassurance that Schaffer’s fringy views aren’t what they voted for, and that they were making a choice on education policy when they voted for Hickenlooper. As in, not Tom Tancredo’s.

That shouldn’t be hard to do, right?