Thanks To A Few Republicans, Kanye Makes CO Ballot 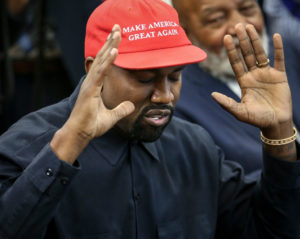 That’s the update this morning from Ernest Luning of the Colorado Springs Gazette to yesterday’s big story in Colorado politics–after a $1,000 check to the state and the timely assistance of Rachel George, former comms director for Sen. Cory Gardner and longtime local Republican operative, rapper Kanye West will appear as an independent presidential candidate on the Colorado ballot:

Among the nine Coloradans who signed up to represent unaffiliated candidate Kanye West as presidential electors are a former state director for the Republican National Committee and a one-time GOP legislative candidate and county party officer, according to documents filed by the rapper’s campaign Wednesday to gain access to the November ballot…

Their role in putting West on Colorado’s ballot — with the assistance of prominent Republican consultant Rachel George, a spokeswoman for U.S. Sen. Cory Gardner when he was in the House and former State Treasurer Walker Stapleton when he was running for governor — has fueled speculation that the erratic billionaire’s candidacy is an effort by President Donald Trump’s allies to siphon votes from presumptive Democratic nominee Joe Biden.

As Vice News reported yesterday, Rachel George characterized her efforts to get Kanye West on the ballot in Colorado as “a joke,” and called for local registered voters “in on the joke” to help her out with the measly nine signatures it takes in addition to the $1,000 filing fee to get on the ballot as an independent presidential candidate in Colorado. But it’s a “joke” with the side effect of maybe peeling off some small percentage of low-information votes that might otherwise have gone for Joe Biden against Donald Trump, and in a state where Republicans are looking at another round of devastating losses in November, every turned trick helps.

Colorado in fact has one of the most permissive laws for minor candidates to get on the ballot of any state, which is why no-namers like “Rocky” De La Fuente and the late fringe candidate Lyndon LaRouche got some of their best name recognition simply by appearing on the ballot here. The few dozen to few hundred votes such candidates receive from Colorado contribute disproportionately to their nationwide total, which is a good indicator that we probably ought to reform our ballot access law.

At the very least, if we’re going to indulge the fantasies of candidates with absolutely no chance of winning, maybe we should charge more than $1,000.

As for Kanye West himself, we can only say again that this is a man whose own family has publicly expressed concern over his mental health, and who has been used more than once by pro-Trump conservatives to promote causes he either didn’t understand or later regretted. He’s not a serious candidate for President, and this is almost certain to end in further embarrassment without any real impact. Despite the fact that a wealthy musician is unlikely to garner much in the way of sympathy, there’s little question that Kanye is being crassly used by cynical, desperate Republicans while paying for the privilege.

And yes, folks.  It is unseemly.