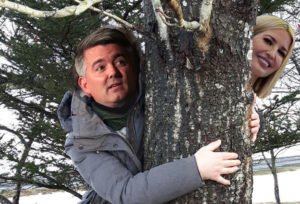 As Blair Miller reports for Denver7, First Daughter Ivanka Trump is in Colorado today to do a little “greenwashing” with Sen. Cory Gardner (R-Yuma):

Ivanka Trump, the president’s daughter and adviser, will embark Thursday on a two-day trip to Colorado for a visit to Rocky Mountain National Park with the Interior secretary and a tour of a child care facility with Sen. Cory Gardner and others.

As we’ve discussed before in this space, Gardner is trying to use his Great American Outdoors Act to camouflage himself as an environmentalist ahead of November’s election (read this Op-Ed from State Rep. Edie Hooton for more on Gardner’s deception). The legislation creates a funding stream for the Land and Water Conservation Fund (LWCF), which is something that Democrats and some Republicans have been trying to do for years. Gardner was awarded the Senate advancement of this legislation in order to help him make a case for re-election in 2020, but it’s notable that Gardner failed to get any Republican member of Colorado’s delegation to support the bill in the House of Representatives on Wednesday. Nevertheless, the bill is on its way to the desk of President Trump.

But as Jesse Paul reports for The Colorado Sun, Gardner’s wobbly record on environmental issues has become more apparent even as he works on “greenwashing” himself. Gardner has consistently refused to support another key public lands bill in Colorado that is sponsored by Rep. Joe Neguse (D-Boulderish):

Another area where Democrats have attacked Gardner is over the Colorado Outdoor Recreation Economy Act, a massive Colorado public lands bill being run by Democratic members of the state’s congressional delegation. Gardner has not thrown his weight behind the measure, citing objections from U.S. Rep. Scott Tipton, a Cortez Republican whose district would be affected by the measure.

Democrats added the CORE Act into the National Defense Authorization Act as it passed this week out of the U.S. House. Gardner credited U.S. Rep. Joe Neguse, D-Boulder, with tacking the measure onto the NDAA, saying it “shows what somebody who is dedicated to passing the bill can make happen.” [Pols emphasis]

But when asked whether he would work to keep the CORE Act as part of the defense bill as it makes its way through the Senate, Gardner said “I don’t think it will happen. I think it’s too late for any amendments here.”

So, wait…Gardner praises Rep. Neguse for working hard to advance a public lands bill that he himself refuses to support? And Gardner cites as his rationale opposition from Rep. Scott Tipton (R-Cortez), who also refused to support Gardner’s public lands bill? If you’re doing the math at home…yes, it seems that 2+2 = 5.

All of this is happening in the same week that Gardner is traipsing around Rocky Mountain National Park with Ivanka Trump so that he can tout his work on public lands policies. For obvious reasons, Rep. Neguse is not impressed:

If @IvankaTrump wants to support #publiclands when visiting my district, she should tell @realDonaldTrump to withdraw his veto threat against the #CORE Act, my bill w/@MichaelBennet to protect 400,000 acres of #Colorado wilderness.

Neguse is right to question Gardner and Trump’s commitment to protecting public lands, and this won’t be the end of that story. Gardner is still evading questions about whether he will support the nomination of William Perry Pendley as the full-time Director of the Bureau of Land Management (BLM); remember, Gardner patted himself on the back for helping to orchestrate the move of the BLM headquarters to Grand Junction as an “opportunity to better protect public lands.” Gardner can’t very well call himself a public lands defender if he backs the nomination of a guy who has repeatedly advocated for SELLING OFF PUBLIC LANDS. But Gardner is also terrified to oppose President Trump, so he finds himself in quite the political conundrum.

The Great American Outdoors Act is a laudable piece of legislation, but there is so much more that Gardner could be doing if protecting public lands was truly a concern for him and not just a talking point for a re-election campaign.