Get More Smarter on Tuesday (July 21)

Today is “Racial Harmony Day” in Singapore, which seems like something that should be a thing everywhere. Let’s Get More Smarter. If you think we missed something important, please include the link in the comments below (here’s a good example). If you are more of an audio/visual learner, check out The Get More Smarter Show or The Get More Smarter Podcast. And don’t forget to find us on Facebook and Twitter.

► With the coronavirus continuing its rampage across the United States and the economy suffering in-kind, Congressional Republicans are working on some sort of new relief bill. As The Washington Post reports:

The emerging GOP coronavirus relief bill appears likely to embrace some of President Trump’s key priorities, despite opposition from within his own party, including a payroll tax cut, very little aid to state and local governments, and measures tying school funding to the reopening of classrooms.

Some of these provisions are already sparking pushback from key Senate Republicans, and an even bigger showdown with Democrats appears inevitable.

That clash could come Tuesday, when Treasury Secretary Steven Mnuchin and White House Chief of Staff Mark Meadows are set to meet with House Speaker Nancy Pelosi (D-Calif.) and Senate Minority Leader Charles E. Schumer (D-N.Y.) for the first bipartisan talks on what will almost certainly be the last major coronavirus relief bill before the November elections. Mnuchin and Meadows will also meet with Senate Republicans on Tuesday as they seek to quell any discontent…

…Senate Majority Leader Mitch McConnell (R-Ky.) is giving Congress just three weeks to write the bill before adjourning for summer recess. With multiple issues dividing the two parties and creating rifts between the White House and Senate Republicans, it’s shaping up as a daunting task.

Senate Finance Committee Chairman Charles Grassley (R-Iowa) is among those who are skeptical about the efficacy of a payroll tax cut — which isn’t going to do much for the 12 million unemployed Americans who are unlikely to be able to return to their former workplace. Democrats, meanwhile, are pushing for a bigger bill that would include extended unemployment benefits, new stimulus checks, and more financial help for state and local governments.

Vox.com explains what a disaster it could be if Republicans don’t renew extended unemployment benefits.

► We really don’t need to explain why this is so absurd:

We are United in our effort to defeat the Invisible China Virus, and many people say that it is Patriotic to wear a face mask when you can’t socially distance. There is nobody more Patriotic than me, your favorite President! pic.twitter.com/iQOd1whktN

► Democratic Presidential candidate Joe Biden says that Russia will face significant consequences if it continues interfering in U.S. elections. From The Washington Post:

“I am putting the Kremlin and other foreign governments on notice,” the former vice president said in a 653-word statement. “A range of other actions could also be taken, depending on the nature of the attack. … I will not hesitate to respond as president to impose substantial and lasting costs.”

During a virtual fundraiser that evening, Biden noted that he recently began receiving classified briefings again as the presumptive Democratic presidential nominee and suggested such meddling is underway. “We saw it in ‘16, we saw it in ‘18, and we’re seeing it now,” Biden told donors. “Russia, China, Iran and other foreign actors are working to interfere in our democracy and undermine our faith in our electoral process. We can’t let that happen.”

► 9News fact-checks a rather disgusting attack ad from the National Republican Senatorial Committee (NRSC) regarding Democrat John Hickenlooper and a deadly home explosion in Firestone a few years back. 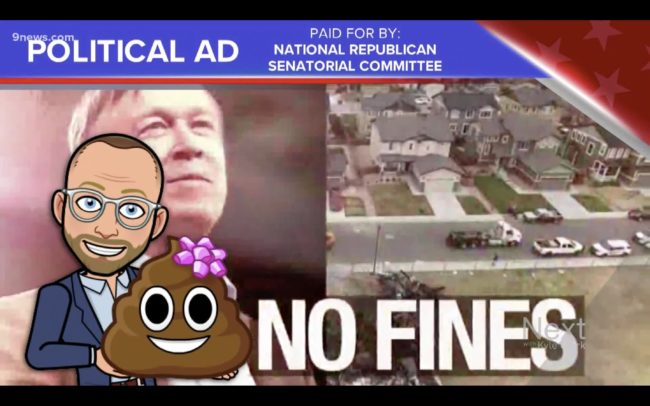 The new state guidelines come as Denver Public Schools, Colorado’s largest district, has hit the brakes on in-person learning, and the second-largest, Jeffco Public Schools, is being asked by its teachers to follow suit.

“We know at this time there’s a lot of anxiety for our educators, staff and our families,” Katy Anthes, commissioner of education for the Colorado Department of Education, said during a virtual news conference Monday. “We hear the stress and all of the different perspectives on this issue. We know educators are anxious about the coronavirus and we certainly understand and share that concern.”

The state guidance stresses the importance of forming “cohorts,” or groups of students who stay together through the day to limit their exposure to others. But state officials wouldn’t say what they think the ideal number of students is in a cohort.

In delaying the start of in-person classes into September at the earliest, DPS leaders cited health officials’ concerns that the district’s cohorts would be too large given the current spread of COVID-19 in Denver.

► Surgeon General Jerome Adams is facing increased pressure to do SOMETHING proactive about the coronavirus. In the meantime, Adams will be the face of a new federal campaign encouraging people to wear masks.

► As Chris Cillizza writes for CNN, Senate Republicans aren’t even pretending that they care about rank hypocrisy when it comes to the U.S. Supreme Court:

On March 16, 2016, President Barack Obama nominated Merrick Garland to fill the vacancy caused by the death of Justice Antonin Scalia the previous month.

On March 16, 2016, Senate Republicans made clear that they would not even hold confirmation hearings for Garland, much less schedule a vote on whether he should ascend to the Court.

Given that, you could be forgiven for being surprised by this headline on CNN on Monday night: “Republican leaders vow to fill a potential Supreme Court vacancy this year, despite some apprehension.”

► Senator Cory Gardner (R-Yuma) is covering for President Trump on allegations that the U.S. has not responded to Russian efforts to put monetary bounties on American troops. As The Colorado Times-Recorder explains:

Asked earlier this month about President Donald Trump’s handling of the Russian bounty scandal, U.S. Sen. Cory Gardner (R-CO) launched into an attack on Russia, instead of criticizing the president, and shifted blame to the left, saying Speaker of the House Nancy Pelosi (D-CA) and Senate Minority Leader Chuck Schumer (D-NY) had the same U.S. intelligence showing Russia paid bounties to Taliban-linked mercenaries to kill U.S. troops in Afghanistan.

Gardner’s criticism of Russia, not Trump, mirrors Gardner’s pattern in similar situations where both Russia and Trump have faced scrutiny.

► President Trump is sending federal law enforcement officials to Chicago, which has plenty of people apprehensive after the armed federal response in Portland last week.

► The Denver Post reports on a protest in Greenwood Village on Monday in which some of Colorado’s biggest musical acts pledged to boycott the area:

From a distance, it may have looked like a breezy summer concert in an affluent Denver suburb. But the hundreds of people that gathered in the park behind Greenwood Village City Hall on Monday night weren’t just there to hear Nathaniel Rateliff & the Night Sweats, the Flobots or Wesley Schultz of The Lumineers.

They were there to let the Greenwood Village City Council know its resolution shielding the city’s police officers from civil liability in instances of civil rights violations won’t stand. Not if they and some of the state’s most prominent musicians have anything to say about it.

The “march and play-in for justice” was the second demonstration outside Greenwood Village city hall since the council sought to undermine the state’s new accountability legislation by resolving never to find its officers acted in bad faith in interactions with residents. After the resolution passed July 6, more than 100 protesters took to the streets despite the use of a city snow plow to block street access to the city hall parking lot.

In between Rateliff’s hit “Say it Louder” and Schultz’s cover of Bruce Springsteen, State Sen. Jeff Bridges took the microphone. Bridges, who lives in Greenwood Village, said his first concert was at Greenwood Village venue Fiddler’s Green Amphitheater, but that he won’t return to the venue until the City Council rescinds its resolution.

► Garfield County Commissioners want their area to be exempt from clean air requirements because…they pollute the air too much already?

► As Denver7 reports, it will cost upwards of $1 million to clean up the State Capitol building following a long string of protests in June.

► Pro-fracking groups say they are close to collecting the required amount of signatures to get two measures on the Colorado ballot this fall. As The Grand Junction Daily Sentinel reports, the rhetoric is already ridiculous:

“If 284 doesn’t pass, the next time you buy or remodel a home in Colorado, you may not have the option to install or use a gas range, gas fireplace, gas heat or other gas appliances,” the group said in a statement.

“Government should not be allowed to take away our ability to choose an affordable, clean-burning, reliable and convenient energy source for heating our homes and cooking our meals.”

During this year’s session, the Colorado Legislature passed and Gov. Jared Polis signed a bill into law that requires homebuilders to offer buyers the option of having only an electrical heating system.

That measure, which passed on nearly party-line voted in the Democratic-controlled Legislature, does not ban the installation of gas lines.

► As POLITICO reports, fossil fuel industries — including coal and oil and gas producers — are on a rapid decline because of coronavirus and other climate-related factors. Also, nobody in this story is blaming SB-181.

House Majority Leader Steny Hoyer (D-Md.) on Tuesday called on Rep. Ted Yoho (R-Fla.) to apologize both personally to Rep. Alexandria Ocasio-Cortez (D-N.Y.) and publicly in a speech on the House floor for calling her “disgusting” and a “fucking bitch.” [Pols emphasis]

The Hill reported earlier Tuesday that Yoho had confronted Ocasio-Cortezon the Capitol steps the day before and berated her for recently suggesting that poverty and unemployment are driving a spike in crime in New York City during the coronavirus pandemic. He told her that she was “disgusting” and “out of your freaking mind,” and as he walked away, Yoho added: “Fucking bitch.”

► Chaos. That’s the operative word when talking about the current state of affairs regarding the House Republican caucus in Colorado.