Get More Smarter on Tuesday (June 2)

Happy International Sex Workers’ Day; please celebrate responsibly and in private. Now, let’s Get More Smarter. If you think we missed something important, please include the link in the comments below (here’s a good example). If you are more of an audio/visual learner, check out The Get More Smarter Show or The Get More Smarter Podcast. And don’t forget to find us on Facebook and Twitter.

► Dear Leader Trump announced on Monday evening that he would use armed military forces to quell nationwide protests if state governors did not act more aggressively — remarks that were condemned locally by Gov. Jared Polis and Denver Mayor Michael Hancock. He also said he was a “friend” to peaceful protestors just before he walked to St. John’s church for a photo op on a route cleared of peaceful protestors by tear gas. As The New York Times reports:

People who gathered outside the White House to protest police brutality spent Monday waving signs and screaming for justice. They watched as police officers and National Guard units flooded Lafayette Square, delivering on a threat made by President Trump. And just before the city’s 7 p.m. curfew went into effect, they were hit with flash-bang explosions and doused with tear gas.

It was because the president, who spent part of the weekend in a secure bunker as protests roiled, wanted to have his picture taken holding a Bible at a battered church just beyond the gates. 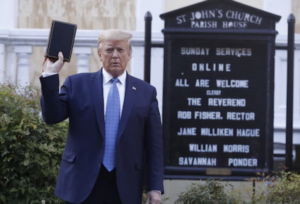 The actual President of the United States of America

Stephen Collinson of CNN called the stunt “a moment of vanity and bravado.” As The Washington Post reports, the Right Rev. Mariann E. Budde was incensed by Trump’s photo op:

“I am the bishop of the Episcopal Diocese of Washington and was not given even a courtesy call, that they would be clearing [the area] with tear gas so they could use one of our churches as a prop,” Budde said.

She excoriated the president for standing in front of the church — its windows boarded up with plywood — holding up a Bible, which Budde said “declares that God is love.”

“Everything he has said and done is to inflame violence,” Budde of the president. “We need moral leadership, and he’s done everything to divide us.” [Pols emphasis]

As The Washington Post reports in a separate story, President Trump staged ANOTHER photo op on Tuesday at a notable religious site and got blasted once again:

In a statement Tuesday morning as the president was arriving, Washington Archbishop Wilton Gregory slammed the visit and the tactics Trumped had used for the photo opportunity at St. John’s Episcopal Church.

“I find it baffling and reprehensible that any Catholic facility would allow itself to be so egregiously misused and manipulated in a fashion that violates our religious principles, which call us to defend the rights of all people even those with whom we might disagree,” Gregory said. [Pols emphasis]

► Former Vice President Joe Biden, meanwhile, delivered a speech in Philadelphia on Tuesday morning that was much more evocative of the sort of “presidential” address Americans might have hoped to see from Trump. From NBC News:

Joe Biden on Tuesday praised the nationwide peaceful protests to the death of George Floyd, calling his killing in police custody a “wake-up call for our nation” and drawing a stark contrast between President Donald Trump’s tactics and how he would respond.

In a speech from Philadelphia City Hall, Biden repeated Floyd’s final words before he died after a white Minneapolis police officer knelt on his neck for more than eight minutes — and said it was time “to listen to those words … and respond with action.”…

…”I won’t traffic in fear and division. I won’t fan the flames of hate. I will seek to heal the racial wounds that have long plagued this country — not use them for political gain,” he said. “I’ll do my job and take responsibility. I won’t blame others. I’ll never forget that the job isn’t about me.

► An early glimpse at polling data shows that Americans seem to be largely sympathetic to protests following the killing of George Floyd. Via Morning Consult: 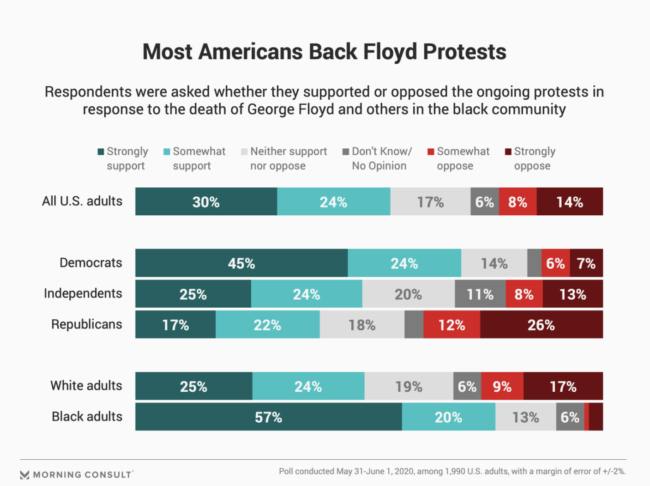 A separate poll from CBS News shows that a majority of Americans agree that police officers generally treat white people much better than they treat black people.

► If you’re wondering what Colorado’s U.S. Senators had to say about Trump’s comments to state governors earlier on Monday, you won’t be all that surprised to read this from Colorado Public Radio:

While Gardner said he did not hear Trump’s comments, fellow Colorado Sen. Michael Bennet was not surprised by the president’s tone.

“It’s disgraceful we have somebody in the White House who thinks the answer to this is more violence and more division,” the Democratic senator said. “We need more enlightened leadership than that.”

Bennet said what was needed wasn’t more force, but a real response to “the institutional racism that exists in this country at every level of our society.”

Gardner said all Americans can and should do better.

Pools and playgrounds could soon reopen under modified guidelines, the state of Colorado announced Monday.

Gov. Jared Polis extended the safer-at-home order through July 1, but this new phase is called, “safer at home and in the vast great outdoors.”

In a press release, Polis said people are able to practice greater social distancing in outdoor areas, but urged Coloradans to continue to limit contact and wear masks outside the home.

As part of the modified order, the state released new guidance for personal recreation, the outdoor industry, and places of worship. The public can comment on the guidelines through Wednesday, June 3, before they’re finalized Thursday.

► There’s more evidence to support the belief that at least some of the “protestors” in Denver are not at all interested in supporting calls to end police brutality.

► Longtime conservative columnist George Will has had enough of Republicans and is hoping for an electoral wipeout of the GOP in 2020. As Will writes for The Washington Post:

In life’s unforgiving arithmetic, we are the sum of our choices. Congressional Republicans have made theirs for more than 1,200 days. We cannot know all the measures necessary to restore the nation’s domestic health and international standing, but we know the first step: Senate Republicans must be routed, as condign punishment for their Vichyite collaboration [Pols emphasis], leaving the Republican remnant to wonder: Was it sensible to sacrifice dignity, such as it ever was, and to shed principles, if convictions so easily jettisoned could be dignified as principles, for . . . what? Praying people should pray, and all others should hope: May I never crave anything as much as these people crave membership in the world’s most risible deliberative body.

► On the subject of spineless Republican Senators, Colorado’s Cory Gardner is out with a new television ad that is basically narrated by CBS4 Denver reporter Shaun Boyd:

► You might recall that Sen. Gardner was thoroughly embarrassed late last month after pretending to draw a line in the sand about the U.S. Senate passing another coronavirus relief package and then folding shamefully just a day later. As The Washington Post reports, Gardner probably should have showed some more backbone:

It might be hard to imagine how things could get worse. Here’s one way: The massive federal spending to prop up a pandemic-ravaged economy is starting to run out. If Congress doesn’t agree on how to replace it in the weeks ahead, millions of Americans who have lost their livelihoods during the shutdowns will be pushed to the brink.

The escalation of chaos in American cities over the past week already has added a crisis to a crisis on top of a crisis, as the economy reels from a once-in-a-century shock and the U.S. coronavirus death toll climbs to 103,000 and counting.

As more than 40 million people have lined up for jobless benefits over the past 10 weeks, the multitrillion-dollar surge of relief from Washington has helped to limit personal financial pain for low and middle-income earners. But federal policymakers designed that effort on the fly to cover an emergency most thought would have ended by now. The emergency endures, and the safety net is fraying badly as lawmakers divide along partisan lines about how to replace it.

“If we miss the mark, we need to be held accountable,” said Pazen in an interview with The Denver Post. “Including myself.”

► As Colorado Public Radio reports, state lawmakers returned to a boarded-up and spray-painted State Capitol on Monday. Lawmakers may discuss legislation intended to address police brutality as soon as today.

► Colorado health officials are worried about a resurgence of COVID-19 cases in the state, particularly after a weekend of protests that included large groups of people clustered together.

► Former Gov. John Hickenlooper was subpoenaed to testify about a dubious ethics claim stemming from his prior administration.

► Colorado’s Supreme Court rules against another effort to promote “Personhood” in Colorado.

► The Mesa County Board of Commissioners selected an elections expert to oversee a recall effort against County Clerk Tina Peters. Former Secretary of State Wayne Williams had apparently expressed an interest in the role.

► The Poudre School District in Northern Colorado is expected to declare a fiscal emergency today.

► President Trump wants to declare “Antifa” a terrorist organization, though it’s unclear how this would even work.

► If you have a tiger at home, make sure it wears a face covering when out in public.

► More on President Trump and his Bible from Slate:

Trump’s slow walk to the church was not an event that began with a photo-op. It consisted of nothing but the photo-op itself. The president did not give a speech at the church. No clergy joined him. He did not read a passage from the Bible he held. When a reporter on the scene asked Trump if it was his own Bible, he replied, “It’s a Bible.”

► There is no bar too low for House Minority Leader Patrick Neville to sink toward.