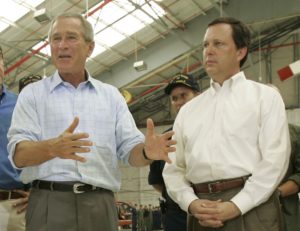 Michael Brown, who became famous after President George W. Bush told him that he was doing a “heck’ve a job” during the Katrina disaster, already knows he isn’t going to take a vaccination against COVID-19, if one becomes available, and, meanwhile, he thinks mask-wearing is in many ways an “utter joke.”

“A mask provides a clear indication to government officials that you are in compliance, that you are a good little citizen doing what they ask you to do,” said Brown during his radio show yesterday titled “Enough with the Masks” on KOA 850-AM in Denver. “That’s why I think masks are, in many ways, just a joke, just an utter joke. And I don’t care if you wear one.”

Brown compared what he sees as flawed climate science to what he also sees as the bogus science behind mask-wearing.

Brown was forced to resign as FEMA director in 2005, as the death toll from Katrina mounted and the federal government was under fire for its slow response, much like Trump is being criticized today. Hence, some are calling the virus Trump’s Katrina.

Before the scope of the disaster unfolded, President George W. Bush infamously told “Brownie,” as he called Brown, that he was doing a “heck’ve a job,” and the nickname stuck.

On the radio yesterday, Brown went on to say he won’t take a COVID-19 vaccine, because it won’t be safe enough for him.

There’s no basis for the statement that the government will abandon all safety precautions in developing a COVID-19 vaccination. In fact, the long timeline is due to the need for addressing many safety issues involved.

At the beginning of his Tuesday show, Brown told the story of a retired school teacher in a small town in New Mexico who tore off his mask after Brown told him he didn’t have to wear a mask, despite the governor’s orders to do so.

“There’s no law, even though there’s a sign that says there’s a law, there’s no law that says you have to wear that mask,” Brown recounted telling the man. “It’s just the governor telling you that you have to do that. Do you really think in this little town that the local cops are going to come over and order me or you to put your mask on? And he goes, ‘No. Damn it.’ And he tore his mask off and started talking to us.”

“Why do we so willingly give in to these orders?” Brown asked his listeners. “What’s wrong with us as Americans? Where’s our sense of, ‘No, we’re not going to do this?'”

Since March, in multiple shows, Brown has been slamming stay-at-home orders and calling for a quick reopening of the economy, saying that progressives are using the pandemic to advance a progressive political agenda.