President Trump is Now His Own Physician 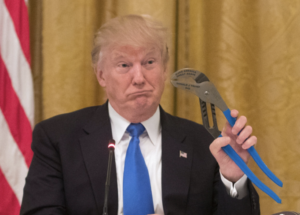 President Donald Trump said Monday that he has been taking anti-malaria drug hydroxychloroquine for over a week to prevent coronavirus infection even though it is not yet a proven treatment.

He added: “I’m taking it, hydroxychlororquine. Right now, yeah. Couple of weeks ago, I started taking it. Cause I think it’s good, I’ve heard a lot of good stories.”

Trump’s comments come weeks after the Food and Drug Administration issued a warning about the drug, saying it became aware of reports of “serious heart rhythm problems” in patients with the virus who were treated with the malaria drugs, often in combination with antibiotic azithromycin, commonly known as a Z-Pak.

The Food and Drug Adminstration has WARNED AGAINST TAKING hydroxychlororquine for treating coronavirus. At least two different studies have found that the drug is useless in combatting COVID-19, but that’s not why this is such a risky proposition. As The Washington Post reported on Friday:

Clinical trials, academic research and scientific analysis indicate that the danger of the Trump-backed drug is a significantly increased risk of death for certain patients. Evidence showing the effectiveness of hydroxychloroquine in treating covid-19 has been scant. Those two developments pushed the Food and Drug Administration to warn against the use of hydroxychloroquine outside of a hospital setting last month, just weeks after it approved an emergency use authorization for the drug.

Alarmed by a growing cache of data linking the anti-malaria drug to serious cardiac problems, some drug safety experts are now calling for even more forceful action by the government to discourage its use. Several have called for the FDA to revoke its emergency use authorization, given hydroxychloroquine’s documented risks. [Pols emphais]

In short, President Trump is now taking a dangerous drug with potentially deadly side effects to treat a virus that has not infected him. Apparently this is a better risk than just admitting that he was wrong about hydroxychloroquine.