At Least She’s Not Your Lieutenant Governor 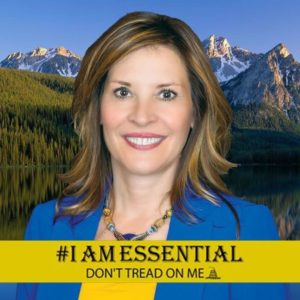 As the Idaho Statesman reports, relations between the governor and lieutenant governor in the Gem State–both allegedly rock-ribbed conservative Republicans in charge of one of America’s reddest state governments–have turned decidedly frosty in recent weeks as the “establishment” and insurgent wings of the Republican Party come into conflict over measures to fight the COVID-19 pandemic. GOP Gov. Brad Little has reportedly not spoken to his “Lite Gov” in three weeks:

In Idaho, the governor and lieutenant governor are not elected on a joint ticket. While Little won the 2018 Republican gubernatorial primary with 37% percent of the vote, McGeachin eked by in a closer GOP primary, receiving 29% of the vote. Little and McGeachin each received 60% of the vote in the general election.

McGeachin has defied Little and his administration throughout the pandemic. She left the Legislature’s 2020 session early — the lieutenant governor presides over the Senate — to attend to her family business, a restaurant and pub in Idaho Falls. She has attended or supported rallies opposing Little’s stay-home order and has been urging him to let businesses re-open. She defied his state order earlier this month to attend an event at a North Idaho brewery that re-opened despite Little’s order.

This week she wrote a guest opinion challenging Little’s decisions…

As Lieutenant Governor, I am one heartbeat away from the governor’s chair. [Pols emphasis] I am also a small business owner. My family and I own four small businesses in the restaurant and automotive industries, employing hundreds of Idahoans. As a former member of the Idaho House of Representatives, I represented a district in eastern Idaho for many years and was viewed as a champion of small businesses and entrepreneurs.

My reputation and current position has many constituents asking me why small businesses and entrepreneurs — who make up the backbone of Idaho’s economy — are largely underrepresented in the Governor’s coronavirus advisory committees, task forces, and economic reopening committees.

Yikes! While it’s true that a major part of a lieutenant governor’s job is to be ready to assume the duties of the boss in the event it becomes necessary, the timing of McGeachin’s reminder of that fact is a bit troubling–especially given all the rhetoric flying around on the far right these days about tyrannical governors and rebellion against measures to combat the pandemic. Here in Colorado, after cantankerous Lt. Gov. Joe Rogers made life gaffe-matic for Republican Gov. Bill Owens during Owens’ first term, the law was changed so that the gubernatorial nominee picks his own running-mate.