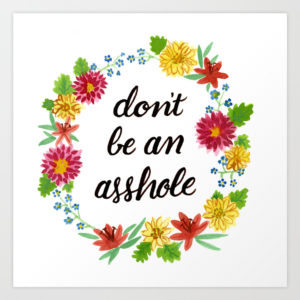 This week started with lots of news about C&C Breakfast and Korean Kitchen in Castle Rock, which opened up its doors for Sunday brunch and welcomed a swarm of unmasked social distancing deniers encouraged onward by folks such as House Minority Leader Patrick Neville. The Tri-County Health Department and the State of Colorado cracked down on the restaurant on Monday, but not before “Virus First Colorado” and other right-wing cranks could wave American flags outside of the restaurant and declare that the ‘gubmint was getting in the way of their God-given right to infect other people with a deadly virus.

As Megan Schrader wrote for The Denver Post earlier this week:

But there is one thing we know with almost absolute certainty — the virus is being spread from human to human. Most likely the coronavirus is transmitted through airborne particles.

So, it’s unforgivable to advocate tacitly or expressly for others to engage in close personal contact with strangers. Doing so is essentially pulling for team COVID…

…It’s important during this time that we support each other and avoid being too judgemental or too over-the-top-restrictive. Life is now full of impossible decisions about risk avoidance, made harder by a lack of information.

But I will endeavor to do the best I can to avoid contracting and spreading the coronavirus. And I will be critical of those encouraging recklessness at a time when we should all be combating our common enemy. 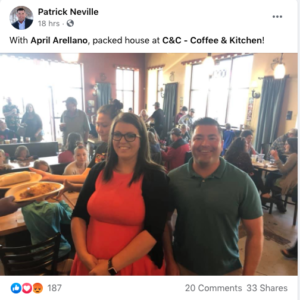 Schrader also had a very specific criticism for Neville, who seems to delight in trying to demonize Gov. Jared Polis and public health officials for doing their best to keep people safe in the midst of a global pandemic:

Neville’s photo is a signal to others that they also should behave as they please during this time. Want to congregate with strangers? “Go ahead. It’s safe. Trust me,” Neville’s smiling photo screams. There are other ways to support local businesses than advocating for them to violate Polis’ orders. [Pols emphasis]

Indeed! And as The Washington Post reported on Thursday, there truly is another way to go about reopening a restaurant in Colorado:

Kelley Chagolla, co-owner of the Charro Mexican Restaurant here in the conservative enclave of Weld County, decided to open her restaurant to diners this week, going directly against the governor’s order to limit service to delivery and curbside. She watched the debacle in Castle Rock closely — where a restaurant opened to packed crowds, drew national attention, and then was shut down and fined — and definitely did not want to go that route…

…Chagolla describes the way C&C opened as “horrific” and emphasized that Charro has been taking multiple precautions to avoid transmission of the virus, including removing salt and pepper shakers from tables, and sanitizing menus, pens and bill trays before each use. [Pols emphasis] Counters received more wipe-downs than usual, but Chagolla left a decision to wear masks up to staffers and customers. Few did on Tuesday night…

…Diners leaving Charro at closing time Tuesday evening said they were impressed with the social distancing measures inside the restaurant and had little fear of contracting the virus there.

Chagolla says she decided to move ahead with opening her restaurant — at 25% capacity — because she needs the income to help offset her $1,650 monthly health insurance payments. “It wasn’t a political statement,” she told The Post. “It was more of a necessity.” Chagolla wasn’t trying to poke elected officials in the eye just because she could; she understood that she could run a business and make every effort to do it safely. 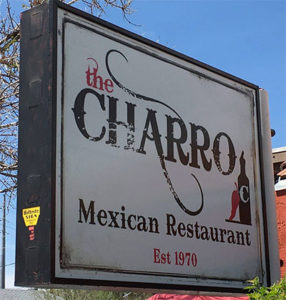 There are plenty of people like Neville and CO-3 Republican hopeful Lauren “Yosemite Samantha” Boebert who have no hesitation defying elected officials — who are making impossible decisions in real time about life-or-death issues — in order to nab some free press and demonstrate their anti-everything bonafides to a handful of right-wing chuckleheads. Thankfully, there are also plenty of people like Kelley Chagolla, who actually operate their lives and businesses with an awareness of how their actions might impact the people around them.

Americans have the right to share their beliefs loudly — even if they are terrible opinions — and we wouldn’t want it any other way. But just because you can doesn’t mean you should, and it’s good to know that there are still lots of people out there who are making their own difficult decisions with at least a modicum of consideration for others.

If you happen to be in Greeley, drop in or order some takeout at Charro Mexican Restaurant. Don’t do it to make a political point — do it because supporting the people who are trying to do the right thing for everyone is how we get through this crisis intact.