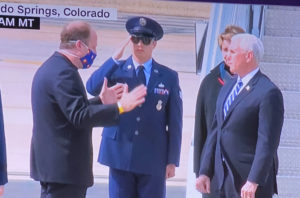 Colorado Public Radio reports on the event dominating Gov. Jared Polis’ work week, a trip to Washington, D.C. to meet with President Donald Trump in a newly contaminated area of the city known as the White House:

“The Governor’s first priority is the health and safety of Coloradans, and the federal government is an important partner in Colorado’s response to the COVID-19 pandemic,” the spokesperson said in a statement.

Polis is expected to push for “more federal support during this global pandemic, including critical testing supplies and personal protective equipment” during the meeting, scheduled for Wednesday.

While Colorado has received shipments from the national stockpile, it hasn’t been enough to meet demand. And efforts to purchase supplies on the open market haven’t always worked out well for the state. At the start of the pandemic, Polis told CNN that one shipment was taken by the federal government.

Headlines over the weekend that staff uncomfortably close to both the President and the Vice President have tested positive for COVID-19 infections make this trip to Washington especially worrisome for Gov. Polis, and the apparent disregard for personal and therefore community safety expressed by both Trump and Mike Pence even after their staffers tested positive is also not what you’d call a good omen either. Gov. Polis has been nothing but diplomatic in his dealings with the Trump administration, even when it would be difficult or impossible for any reasonable person to avoid swear words–which will hopefully work in Colorado’s favor when the moment comes Wednesday to “kiss the ring” and ask Trump to come through with the equipment our state still very much needs.

Gov. Polis may not need hazard pay, but anyone obliged to visit the White House right now should get it.