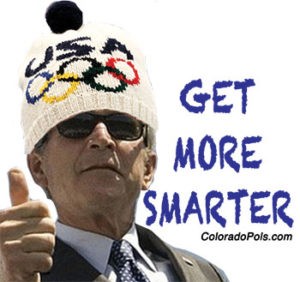 “April showers bring May flowers.” What’s the rhyme for “April snow…”? Now, let’s Get More Smarter. If you think we missed something important, please include the link in the comments below (here’s a good example). If you are more of an audio/visual learner, check out The Get More Smarter Show or The Get More Smarter Podcast. And don’t forget to find us on Facebook and Twitter.

► Politico looks at how states around the country are confused about how to get medical supplies from the federal government. Colorado is now the canonical example for this new form of pork barrel politics:

Colorado Gov. Jared Polis was pleading with the federal government to send ventilators.

The state was starting to see hundreds of new coronavirus cases pop up each day, and Polis, a Democrat, worried that hospitals wouldn’t have enough life-saving ventilators to deal with the looming spike.

So he made an official request for ventilators through the Federal Emergency Management System, which is managing the effort. That went nowhere. He wrote to Vice President Mike Pence, leader of the White House’s coronavirus task force. That didn’t work. He tried to purchase supplies himself. The federal government swooped in and bought them.

Then, on Tuesday, five weeks after the state’s first coronavirus case, the state’s Republican Sen. Cory Gardner called President Donald Trump. The federal government sent 100 ventilators to Colorado the next day, but still only a fraction of what the state wanted.

Arizona Sen. Martha McSally, who is also one of the most endangered Republican Senators in the country, was also awarded with 100 ventilators by the federal government over the weekend. Meanwhile, states continue to struggle with getting and maintaining help from the Federal Emergency Management Agency (FEMA).

► The big story of the weekend was a stunning expose from The New York Times detailing exactly how the Trump administration failed to prepare for the coronavirus outbreak.

Throughout January, as Mr. Trump repeatedly played down the seriousness of the virus and focused on other issues, an array of figures inside his government — from top White House advisers to experts deep in the cabinet departments and intelligence agencies — identified the threat, sounded alarms and made clear the need for aggressive action.

The president, though, was slow to absorb the scale of the risk and to act accordingly, focusing instead on controlling the message, protecting gains in the economy and batting away warnings from senior officials. It was a problem, he said, that had come out of nowhere and could not have been foreseen…

…Unfolding as it did in the wake of his impeachment by the House and in the midst of his Senate trial, Mr. Trump’s response was colored by his suspicion of and disdain for what he viewed as the “Deep State” — the very people in his government whose expertise and long experience might have guided him more quickly toward steps that would slow the virus, and likely save lives.

Chris Cillizza of CNN breaks down this incredibly damning story.

The President is not taking the criticism well, as you would expect, raging in every direction as he looks for people to blame who aren’t named Trump. There are growing concerns that Trump may be looking to oust Dr. Anthony S. Fauci, director of the National Institute of Allergy and Infectious Diseases and one of the nation’s foremost experts on coronavirus. #FireTrumpNotFauci was trending Monday on social media platforms.

► As Andrew Baumann and Pete Maysmith write, President Trump’s coronavirus failures have a similar flavor to his climate change mistakes:

In both the current pandemic and the ongoing climate crisis the Trump administration has ignored the advice of experts, overruled the direction of scientists, and undermined the institutions we rely on to protect us, putting people all across our country and the globe at risk. This recurring incompetence matters to voters—come November, it could (and should) cost Trump his job.

The similarities between the administration’s response to coronavirus and the climate crisis are manifold. Trump’s habit of dismissing experts’ concerns, especially regarding the severity of crises, is disturbing and dangerous. As the coronavirus pandemic began to unfold in January, public health experts warned that we needed to act quickly and improve our ability to test for the virus. Trump’s response: “We have it very well under control”; “It’s very mild”; “It will go away”; the virus is Democrats’ “new hoax.”

Rewind to 2016, when not only scientists, but NASA and our military leaders had all long agreed that climate change was real and posed a serious threat to our country. Yet, despite this overwhelming consensus, Trump repeatedly called climate change a hoax too. In fact, he once made outlandish claims that it was a Chinese hoax. Sound familiar?

► President Trump has said that he wants to “reopen the United States” by May 1, but there is no actual plan in place for the federal government to make this happen. As CNN notes, reopening the country is more of a decision for state governors.

► New polling data shows that 30% of Americans believe COVID-19 was intentionally created in a laboratory, or something.

► One of Colorado’s largest banks is putting a pause on processing emergency business loans due to an overwhelming flood of applications.

► CBS4 Denver looks at how the postal service is changing with the coronavirus times.

► Colorado is preparing a pop-up testing and treatment center for coronavirus at the Colorado Convention Center in downtown Denver.

► 9News looks at the progress of Colorado’s Innovative Response Team.

► Colorado Public Radio looks at the Colorado companies and research facilities that are working furiously to develop treatments — and a potential cure — for COVID-19.

► Britain is extending its coronavirus lockdown, and Russian President Vladimir Putin publicly admits that things are getting bad in his country.

► As Ernest Luning reports for the publication formerly known as the Colorado Statesman, a new campaign finance complaint has been filed targeting a major source of funds for the re-election campaign of Sen. Cory Gardner (R-Yuma):

One of the Democrats who was hoping to challenge U.S. Sen. Cory Gardner is accusing the the leading Republican Senate super PAC of making illegal, in-kind contributions to Gardner by paying for fundraising efforts for his re-election campaign, Colorado Politics has learned.

Dan Baer, who ended his Senate campaign in September after former Colorado Gov. John Hickenlooper joined the primary, charged in a complaint filed with the Federal Election Commission that the Senate Leadership Fund has been spending to encourage donors to contribute to Gardner’s campaign, which Baer argues violates a prohibition on coordination between candidates and super PACS that support them.

In the complaint, filed March 11, Baer is also alleging that SLF hasn’t reported what amounts to an in-kind contribution to Gardner’s campaign and is funneling corporate contributions that it can accept to a federal candidate, who can’t.

► The Colorado legislature’s Joint Budget Committee lays out a potential roadmap for approving a state budget in May.

► The State of Virginia has decriminalized marijuana.

► Former Gov. John Hickenlooper, now a Democratic candidate for U.S. Senate, talks with the Denver Business Journal about his plans to help small businesses recover from the coronavirus outbreak.

► Senator Michael Bennet (D-Denver) says that the Trump tax cut of 2017 will end up making it harder for the United States to pay off coronavirus-related debts.

► A Republican candidate for the state legislature in Colorado thinks we should just let everybody get sick with coronavirus and let nature sort ’em out.

► Vox.com digs into the debate about a federal bailout for the U.S. Postal Service. President Trump mostly wants the post office to charge Amazon.com more money because he hates founder Jeff Bezos.

► Saturday Night Live returned over the weekend with a working-at-home feel to it.
As Dean Obeidallah writes for CNN, the writers and cast members struck the right tone on criticism of President Trump.

► Red Rocks Park and Amphitheatre is closed until further notice, as is Civic Center Park and surrounding areas in Denver.