What you can do to fight back this week (January 21) 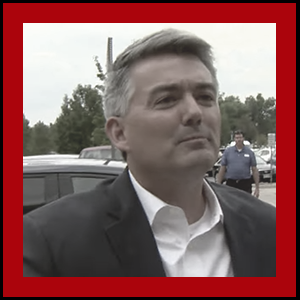 In Washington, the third-ever impeachment trial of a sitting U.S. President is now underway.

And Sen. Cory Gardner has already taken his first vote against Colorado.

A majority of Americans now want President Trump removed from office. [1] Since the U.S. House passed their articles of impeachment, damning new evidence and disclosures by key figures have strengthened the case against the President.

But just moments ago, Cory Gardner voted with Republicans to table a motion to allow witnesses to testify. Cory Gardner is trying to cover up Trump’s crimes.

We can’t let Cory Gardner and Senate Republicans get away with a cover-up. For weeks our members have been calling Gardner’s Washington D.C. office at (202) 224-5941 demanding a fair trial with witnesses and all relevant documents included in the process. Now we need to hold Gardner accountable for voting to protect Trump from accountability. Gardner’s choice to stand with Trump over Colorado deserves to be the final act of his political career. It’s time to tell him so.

Thanks for your continued assistance in holding Cory Gardner accountable. Here are more great ways to take action for the week of January 21:

Denver is shaping big plans to address climate change through land use. Come learn what’s in store and how you can influence the outcome is this event coming up next week!

Join District 9 Councilwoman Candi CdeBaca and her Chief of Staff, former Mayoral Candidate Lisa Calderón, and members of Denver Homeless Out Loud for a training and discussion. The training will be on how to monitor police compliance with the recent settlement in Denver’s class action suit brought by the class of all homeless people in Denver. The City is required to provide notice of any sweeps or taking of belongings. Legal Observers can help ensure the safety and security of our Denver community members experiencing homelessness using the skills normally applied to protests and other events.

Fair Rules for a Fair Trial

We are calling Cory Gardner to uphold his constitutional duty and vote for witnesses and a fair trial. Anything other than this is obvious corruption and demonstrates Cory Gardner cannot be trusted. The House was forced to impeach Donald Trump for breaking the law when he withheld hundreds of millions of dollars in military aid from Ukraine—a top foreign ally—to pressure them into interfering in the 2020 election.

One Colorado, the state’s leading advocacy organization for lesbian, gay, bisexual, transgender, and queer (LGBTQ) Coloradans, will host a press conference on Thursday, January 23rd at 3:30 PM MT on the first resolution to be passed from the new DPS Board of Directors in 2020.

Conservation Colorado and the Colorado Outdoor Business Alliance invite you to hear from a panel of local business owners, farmers, scientists, and water managers on innovative water conservation projects that curb our water use and build drought resilience.

Join Rocky Mountain Values and Colorado Sierra Club as we demonstrate in front of Senator Cory Gardner’s office to urge him to support the CORE Act to protect Colorado’s public lands – all while Sen. Gardner is at a private fundraiser in Beaver Creek, listening to special interests and big time donors instead of Coloradans. All while he’s standing on the very same public lands he refuses to vote to protect.

Join Indivisible activists–experienced and learning–from across Colorado for the Citizens Superpower Summit! Get energized and educated as we launch into primaries–and beyond. Grass-roots activism — and long-term strategic thinking — is more crucial than ever. Power-Up, together, with fresh tools for learning about yourself and finding your own superpowers, then build your power with knowledge and catapult into world-changing with the best power of all: equitable and inspiring community building. Leave this Summit with new friends and a concrete plan to win elections and change the world.

Where: The Franciscan Event Center, 6553 S Revere Pkwy, Centennial
When: Saturday, January 25 at 9:00am

Join us for a FREE Citizenship Workshop on Saturday, Jan 25, from 8 a.m. to 4 p.m. Colorado is your home and we want to help you apply for citizenship.

Denver: No War On Iran! Global Day of Protest

The Trump administration is dragging the United States into a war with Iran that could engulf the whole region and could quickly turn into a global conflict of unpredictable scope and the gravest consequences. The people of the world need to rise up and stop it. For all who believe in peace, for all who are opposed to yet another catastrophic war, now is the time to take action. On Saturday, January 25 in cities across the globe, there will be protests against a new war in the Middle East. Join us in Denver!

Where: Colorado State Capitol, Denver
When: Saturday, January 25 at 2:00pm

Parasol Patrol: Shielding Kids at the Drag for All Ages Show at Mile High Comics

The original event that inspired the birth of Parasol Patrol! Mile High Comics Drag For All Ages Show! We intend to shield performers, their families and audience members from vocal protesters outside the event and to stand in peaceful, silent protest. We will help kids with ear protection to muffle the taunts of the protesters as well as hold up our umbrellas to create a visual barrier while we walk people to and from their cars into the venue.

Thanks again! See you next week.